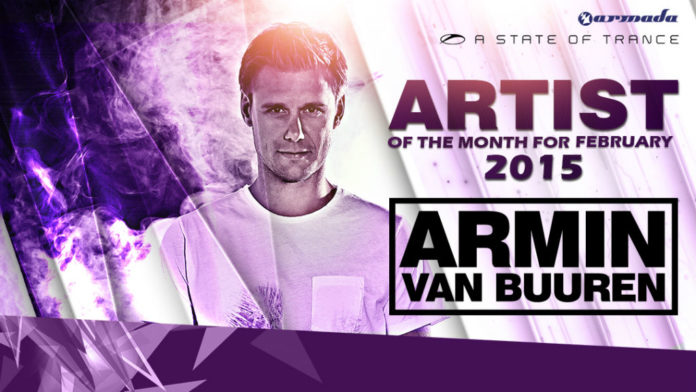 Whenever the words “Trance” and “Greatest” are mentioned in the same breath, you know who they’re talking about. Having shown us that he can do just about anything, he still continues to surprise us with whatever he does. Still at the top of the trance music scene and showing no signs of slowing down, our Artist Of The Month for February 2015 is the one and only, Armin van Buuren. When we talk about the legend that is Armin van Buuren, we wonder what to talk about first – his numerous tracks, his mind blowing live concept shows, or his radio show and podcast, that has become synonymous with good trance music. Born in Leiden, Netherlands on Christmas Day in 1976, Armin would go on to become a law student at the Leiden University. Around the same time, a potential career in DJing kicked off for Armin, which saw him play long sets (Sometimes upto 6 hours) at Club Next. Armin returned to law school to graduate in 2003. All of 19 years, Armin garnered commercial success for his track ‘Blue Fear’ in 1995. His next big track would be ‘Communication’ which was a massive hit in the Ibiza dance circuit. Armin was then signed on by major labels at the time, and started making festival appearances regularly. He cracked into the DJ Mag Poll at #27 in 2001. He even played a 12 hour set at Dancetheater in Holland. Armin also launched his first label Armind in 1999, releasing ‘One’ and ‘Touch Me’, which were well received. By now, Armin had become one of the names to seriously watch out for in the trance scene. He teamed up with Tiesto for the project Major League and produced ‘Wonder Where You Are’ for Tiesto’s Black Hole Recordings. They also teamed up for Alibi, producing ‘Eternity’ which was a massive hit and was signed on by Paul van Dyk on his imprint, Vandit. His collaboration with Ferry Corsten called ‘Exhale’ went Gold in less than a month. After the turn of the century, Armin started his own mix compilations, with edition featuring fresh Armin music. His ‘Sound of Goodbye’ hit no.1 on the Dance/ Club Chart in 2001. DJ Seth Alan Fannin And Armin did a global tour in 2003, playing to a sold out tour of more than 20,000 people in Europe. In 2001, Armin also started the now legendary radio show ‘A State of Trance’, which played the latest and best in trance music. Armin also remixed the 24 theme song in 2004, which became a trance hit. The 200th episode was celebrated with a live performance in the Netherlands, in 2005. In 2005, Armin released his second studio album, “Shivers” and landed the No 2 spot on the DJ Mag rankings the year after. He also celebrated the 250th and 300th episodes of A State of Trance.

What was widely predicted finally happened and Armin was the No.1 DJ on the DJ Mag poll for 2007. And the following year saw Armin release his 3rd studio album, “Imagine”. Along with celebrating 350 episodes of his radio show, Armin also retained his No.1 spot on the DJ Mag poll. He played three huge shows in 2009 to bring in 400 episodes of his radio show, and retained his DJ Mag spot once again, making it three times in a row. 2010 saw the release of “Mirage”, Armin’s fourth studio album. A 4th consecutive No.1 ranking on the DJ Mag Poll followed in October that year. Armin lost his No.1 spot to David Guetta in 2011, only to regain it a year later, making it a record breaking 5 No.1 appearances on the poll. Armin would go on to release another studio album called ‘Intense’ a couple of years later, with ‘This is What It Feels Like’ getting him a Grammy nomination. He is currently playing trance worldwide as Gaia and more progressive based sets as Armin van Buuren. We wish him all the best for the future! :)