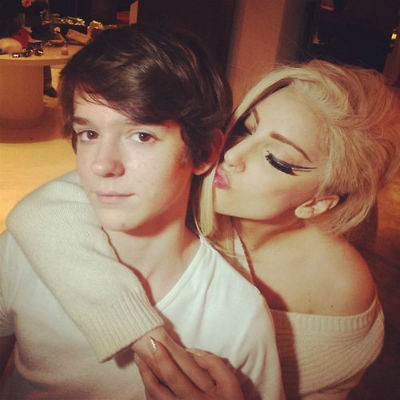 Having already made a name for himself touring with Lady Gaga and working with the Mother Monster on her ARTPOP album, 19-year-old EDM up-and-comer Madeon is ready to crossover in a big way.

He’s already released two EPs, The City and Japan Only, and a handful of singles like “Finale” and “Technicolor,” and with some pop cred under his belt, he’s ready to see if those concepts can be applied to his debut album. The French native (real name Hugo Pierre Leclercq) is prepping tracks for his in-the-works release.

In somewhat rare fashion, France’s Hugo Pierre Leclercq – better known as Madeon – has opened up to MTV in an interview that covers everything from his blazer obsession and new album (release date set for 2035) to his gifted plush toy doppelganger, “Huge Le Squirrel.” It’s an extremely fascinating read from one of electronic music’s brightest young stars, who as you’ll find, is composed well beyond his years.

“I’ve always been in dance music, but I’ve always been a pop fan at heart,” he told MTV News. “I’ve always wanted to work with pop artists and my #1 on my list was Lady Gaga. So when I had the opportunity to do that, I was really thrilled. And, yeah, it’s really fun to be introduced to worlds of radio and charts and all those new concepts that you don’t quite have when you’re just DJing and doing dance music. So it’s been a crazy experience for sure.”

And like fellow ARTPOP producer Zedd, he’s looking to make a seamless transition into pop while also maintaining a strong footing in EDM. “I started working on my album and I’m gonna spend a good chunk of next year working on my album as well,” he said. “It’s a nice toe in the water to see what the other side of the world beyond electronic music is like, ’cause ultimately I just want to do an album that people listen to at home and enjoy, not just in the club.”

So, is there someone he’s hoping to get to lend some vocals to his album? “It’s a little early to say. Personally I really like collaborating with smaller indie artists ’cause i feel like it’s a nice way to introduce people to artists that I love,” he said. “I probably would work more with upcoming artists than big names that’s my kind of vibe. But I love producing big names.”

The young producer is ready to make his mark with a debut album as he matures with new experiences, signaling that he’s pursuing the right direction — the direction which is his own. Following what had been a “very good Madeon album day,” he left fans with a reassuring “A long way to go, but I know where I’m going.”