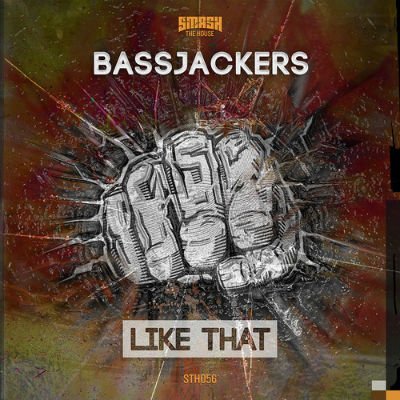 Dutch DJ & Producer duo, Bassjackers, are dropping their latest club killing record, “LIKE THAT” on August 18th on the infamous SMASH THE HOUSE imprint owned by Belgian legends Dimitri Vegas & Like Mike.

During last month’s hugely successful Tomorrowland festival, it seemed like there was one new track that was getting everyone buzzing. Receiving main stage play on both weekends from Dimitri Vegas & Like Mike, Hardwell, Nicky Romero & Martin Garrix, to name a few, “Like That” quickly became an online sensation and topped the “most heard” chart from the festival on 1001 Tracklist. The track, which features a signature high-energy Bassjackers drop and distinctive melody, is clearly created with sole intention of filling arenas of this scale.

2014 was already a huge highlight reel for Marlon Flohr & Ralph van Hilst – collectively known as Bassjackers. It started out with the monstrous track “Crackin’ “ (Martin Garrix edit) which topped all the club play charts for much of January & February and is still played by many major name artists.

This was soon followed by a collab with LA based DJ MAKJ and the track “DERP” which went on to chart officially in the US Billbaord Dance top 20. The summer also saw a collab release on Revealed with up coming DJ Kenneth G, “RAMPAGE” which was first debuted during Hardwell’s closing set @ Ultra 2014.

“Like That” is the first solo release of 2014 for Bassjackers, rightfully Smashing the House as a Beatport Exclusive.