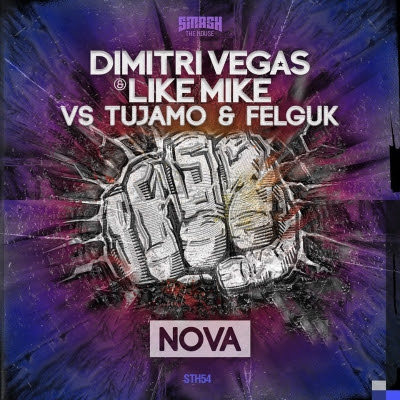 As one of the most heralded labels for exciting, emerging dance music, Smash The House continues to step up its game with the forthcoming release from Dimitri Vegas, Like Mike, Trujamo and Felguk, entitled ‘Nova’.

Premiering this official collaboration on their Smash The House radio show podcast back in July, the anthem can finally follow the conversion from sought-after unknown ID, over to stand-alone banger in its own right, after a Summer of anxious waiting from fellow DJs and fans similarly.

Having played out Tomorrowland’s ‘Smash The House’ stage to a rapturous response earlier this season, German sensation Tujamo now joins forces with not only label bosses Dimitri Vegas & Like Mike, but the rising Brazilian duo of Felguk, for a monster release of epic proportions.

Presenting the exciting merger of forward-thinking electro and big-room house sounds, the track that also dominated Dimitri Vegas & Like Mike’s record-breaking main-stage set at Tomorrowland, weaves together the duo’s high-energy found across their releases and roster, with crowd-busting drops and exhilarating twists and turns, proving itself as a marriage that nurtures new-school talent with individual flair, unavoidable of that trademark Smash The House accessibility and signature sound.

Listen to Dimitri Vegas & Like Mike Vs Tujamo & Felguk – Nova (Original Mix) below.