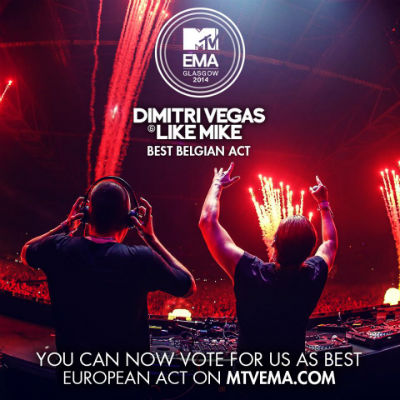 Currently readying their official world tour – ‘Bringing The World The Madness’ – Dimitri Vegas & Like Mike are set to kick start their global adventure with two homecoming shows at the Sportpaleis Arena in Antwerp; where over 33,000 tickets were snapped up in less than 24 hours!

After an unbelievable 12 months that has seen their exhilarating mainstage sets and onstage performances reign supremely at after major festivals around the planet, as well as their benchmark setting Tomorrowland shows, that had the whole 360,000 festival attendees talking about them, the pair recently discovered that they landed the #2 position in the 2014 edition of the Top 10 DJs Poll (making them the first ever duo to break the Top 3 position in the renowned DJ poll).

With the news of scoping the award for ‘Best Belgian Act’ and now the nomination for ‘Best European Act’, the world, along with their native Belgian brothers and sister, seems to be watching in earnest as the next chapter in the story of Dimitri Vegas & Like Mike’s musical adventure unfolds…