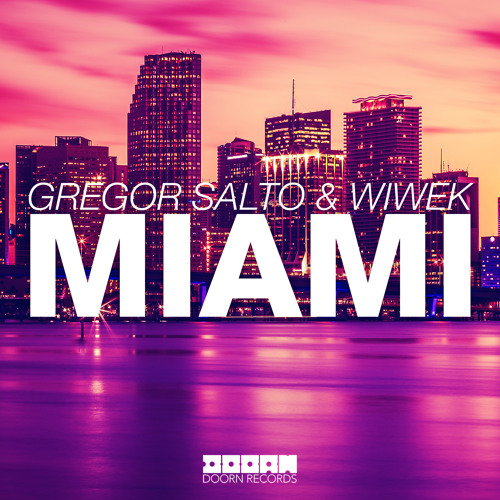 Following on from their widely successful 2014 collaboration ‘On Your Marks’, Salto and Wiwek do not disappoint with this new colossal production. ‘Miami’ is a crisp creation from the dream production duo, that fuses electro-house with Latin elements and a seriously heavy bass line. Built up with percussive sounds and bold synths over its 4-minute duration, we can rest assured that this track will be heard from the speakers at festivals and clubs all around the globe.

Gregor Salto has been producing electronic dance music for over a decade and knows exactly what it takes to get the crowds going. His track ‘Can’t Stop Playing’ with Dr. Kucho! (Oliver Heldens & Gregor Salto remix) saw remarkable success after its release in August 2014, peaking at #4 in the UK Singles Charts and has been Shazamed over 670,000 times. Not only has he received praise for his masterful originals, Gregor has also become renowned for his adept remixing abilities, crafting massive official edits for the likes of JLO, Rita Ora, Mariah Carey and Rihanna. With tour dates scheduled at an array of festivals around the world, and with a slew of original productions & collaborations in the pipeline, Gregor is geared up to make 2015 one of his most productive years to date! A true veteran of the house music scene, stay tuned for the energetic sounds of Gregor Salto!