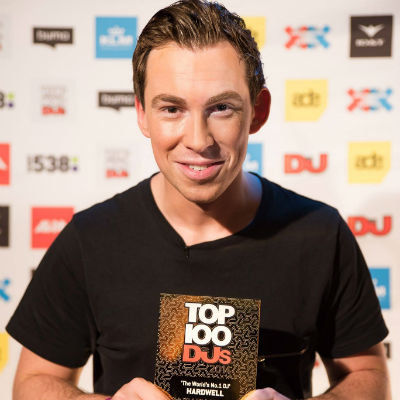 Dutch musical titan Hardwell has done it again – being crowned World’s #1 DJ in the 2014 edition of DJ Mag’s Top 100 DJs Poll for a second consecutive year.

After a prolonged dominance from a pioneering few, Hardwell made history in the 2013 edition of the Top 100 DJs poll by claiming the top spot for the first time in his career and becoming the youngest ever winner at just 25 years of age. Now after a colossal 12-month period of hit records and global tours, Hardwell’s succeeded in holding on to the title of the World’s #1 DJ for a second term and cementing his place atop of the scene’s elite.

Over the coming year Hardwell, fresh from claiming this prestigious accolade for the second year running, is set to deliver a series of projects befitting the World’s #1 DJ. With the announcement of his I AM HARDWELL – United We Are world tour that kicks off with a spectacular show at the Amsterdam’s Ziggo Dome arena on January 24th, a mouth-watering run of releases penned from his label Revealed Recordings, including the emotively titled “Young Again,’ that’s out now. Coupled with a series of exclusive club and festival shows to be announced in the coming weeks and months and, most excitingly, the imminent arrival of his eagerly anticipated debut artist album ‘United we are,’ which will be release on January 23rd. The future for one of dance music’s biggest doyen’s looks very much rock solid.

Hardwell’s growth from a rising star amongst his peers to become one of the scenes most formidable musical titans is an exhaustive journey that was brilliantly captured on film in his mesmerising documentary, I AM HARDWELL. Taking that voyage and raising the bar even further during this period leading up to this year’s victory has been one of truly global proportions. From his mainstage dominating Tomorrowland performances back in July – including a special B2B with Tiësto – to his epic closing set at Miami’s Ultra Music Festival in March, which to date has clocked up over 8.5 million views on YouTube, and lets not forget his glowing headline performances at Ultra Europe, EDC Mexico City, Australia’s Future Music Festival, EDC NYC, EDC Las Vegas, the prestigious Indy 500 Race Event, Mysteryland Netherlands and Dance Valley, as well as playing both the mainstage and his own Revealed Recordings arena at Creamfields, it’s fair to say Hardwell has been a constant presence at every major event worldwide.

Locking in residencies at Las Vegas’s Hakkasan nightclub – that saw him return to the nightlife mecca – after blazing across Europe, Asia, South America and Africa with his I AM HARDWELL concept tour. Whilst announcing the North America leg of his I AM HARDWELL world tour with a spectacular NYC Times Square takeover and revealing a run of confirmed shows at large-scale events in San Francisco, Chicago, Toronto, Vancouver, Los Angeles, Miami before culminating at New York’s iconic Madison Square Garden, in what is set to be an enormous finale to one of the biggest electronic tours of the past 19 months. Fast-forward to the summer months and his debut Ibiza residency at Ushuaia saw him demonstrate, across ten sun-drenched weeks, exactly why he has earned the accolade #1 DJ in the world from the legions of fans that voted over the course of the poll.

For much of his loyal following his ever-present radio show, Hardwell On Air, which is now broadcasting across 80 international stations weekly and holding a solid spot in the iTunes Top 10 podcasts in more than 45 countries, remains their regular dose of all things Hardwell. Giving fans across the globe, a chance to revel in the enthusiasm and energy of this young mans passion for electronic music.

His label Revealed Recordings, now regarded as one of the most forward thinking imprints in the scene, maintains an international presence with its releases, club takeovers and festival arena hosts worldwide, including Creamfields, Amsterdam Dance Event and Miami’s Music Week. Throughout, Hardwell has maintained prolific output of fresh music. Collecting a plethora of Beatport #1’s, including big-room smashes like, ‘Everybody Is In The Place’, his remix of Coldplays ‘A Sky Full Of Stars’ and recent release ‘Arcadia’. As well as other tracks such as his remix of Armin van Buuren’s ‘Ping Pong’, his Hardwell edit of Deorro & J-Trick’s ‘Rambo,’ and not forgetting his debut entry into the UK chart ‘Dare You,’ that reached #18. His latest single from his forthcoming album is new single ‘Young Again’ with Chris Young on vocals, which is out now.

Never one to rest on his success, Hardwell’s dedication to his fans is unrivalled. Having amassed in excess of 6.9 million Facebook ‘likes’ and 1.7 million Twitter followers, Hardwell regularly engages directly with them, introducing his exclusive Q&A series ‘Behind The Decks’ series where the Dutch maestro offers a candid insight into his world as an international touring artist. It is this intrinsic bond between artist and audience, which has been fostered since Hardwell started out on this journey at just 14, that has cultivated his dedicated legions of fans to catapult Hardwell to the very top of the renowned DJ poll for a second year running.

Commenting on his sensational 2014 crowning, Hardwell said: “To achieve this accolade two years running is an incredible feeling. I’ve worked really hard this year to give back to the fans and commit to them all that I can and to know they’ve embraced my music and DJ sets with such open arms leaves me speechless. The passion and spirit I see from all the guys and girls on the dancefloor is so unbelievably magical, their love for this scene and the music is the biggest inspiration there is. This win is undoubtedly a huge milestone for me but more than anything else this win is also about them! They are what makes each and every Hardwell show so special and unique. So thank you, for your continued and unequivocal support.”

What are your views on this year’s DJ Mag Top 100 results? Let us know by posting in the comments’ section below! 🙂

Music Akshay Bhanawat - February 28, 2020
0
CYB3RPVNK veteran Skytech celebrates his 10th release on the label by teaming up with fellow Polish producers Twisterz for their new track "Not Alone."...

Jay Nebula Releases The Acoustic Version Of ‘Fool For You’ ft. Kaleem Taylor

Icarus Kick Off Decade With Fluttering New Single ‘Fade Away’

Music Akshay Bhanawat - February 28, 2020
0
Bristol duo Icarus mark their first release of 2020 with new single ‘Fade Away’, out now via FFRR / Parlophone. A weightless, fluttering electronic...
ABOUT US
What started as an interest, slowly turned into a passion, and before we knew it, we had curated and founded a thriving community of avid electronic dance music lovers.
FOLLOW US
© Copyright 2020 - T.H.E Music Essentials