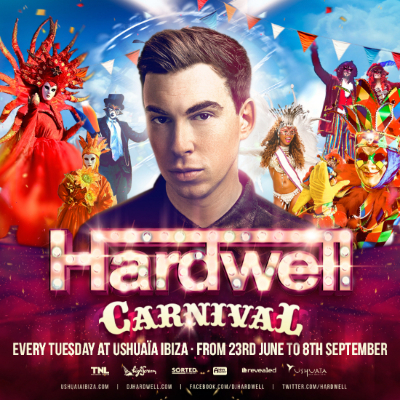 Following a summer that saw the Dutch titan complete his debut residency on the world famous island of Ibiza, the Revealed Recordings head honcho and global DJ star Hardwell now returns to his adopted party home of Ushuaïa Ibiza for another season of spectacular summer fiestas.

Always keen to push the envelope of his production as well as his events, summer 2015 will see Hardwell launch an all-new event for his exclusive Ibiza show – Hardwell’s Carnival!

Embodying the sound of a modern generation of dance-lovers, rave-worshippers and electronic enthusiasts, Hardwell announces his return to Ushuaïa Ibiza every Tuesday, for 12 epic weeks of Hardwell’s Carnival. Picking up from last years hand-picked roster of talent which spanned a range of fresh, upcoming artists mixed with a selected group of heavyweight star DJs, Hardwell and his team have been busy working on choosing an impressive array of A-list artists and emerging new talent for this years season on the White Isle, with full line-up details to be announced very soon.

Taking the Carnival concept to a whole other realm, as this exclusive new clubbing experience collides with the festivities of dance, culture, costumes and most importantly, music, expect to hear the peak-time workings of Hardwell and friends soundtracking the moments of the Summer season, surrounded by stilt walkers, masquerades and carnage-creators, that are unlike anything else Ibiza will see in 2015.

Hot off scooping 5 IDMA awards this year with accolades including ‘Best Global DJ’ and ‘Best Podcast or Radio Mix Show’ for his globally syndicated ‘Hardwell on Air’ show, Hardwell takes his total of industry-recognised IDMAs received to 11 – a rare and impressive feat for any world-class electronic artist, only signalling his sparkling future ahead – with his commanding attention to detail and driving force in the live arena, poised to accelerate even further for 2015. With his debut album ‘United We Are’ shooting up the global charts to claim the #2 position on the iTunes Album Chart worldwide, Hardwell’s next offering is set to follow in similar suit as he readies for the release of his brewing Summer anthem ‘Follow Me’ featuring Jason Derulo.

Since his first trip to the island of Ibiza in 2010, Hardwell’s career has swelled to arena-dominating status with his latest colossal offering being the launch party of his ‘United We Are’ album, as well as his world tour kick-off, which took place at Amsterdam’s Ziggo Dome with 2 sold-out events to rapturous applause on both nights! During the weekend’s launch event Hardwell beamed his sound global once again as hundreds of thousands tuned into the livestream across all four corners of the globe to watch one of the most in-demand artists of a generation deliver a show of truly memorable proportions and the Summer season madness in Playa d’en Bossa is next in line…