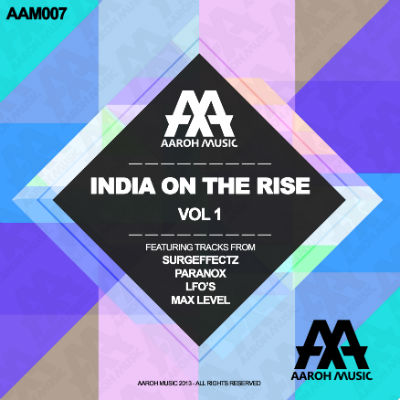 A year and a half since its establishment, The Dirty Code’s record label, Aaroh Music, is proud to present the first edition of “India On The Rise EP” featuring: Surgeffectz , Paranox , LFOs & Max Level.

This EP will be out on 13th April 2015 as Beatport exclusive and 27th April, 2015 on all other leading digital stores.

Paranox aka Parakh Mathur , DJ/Producer, is arguably the pioneer of filthy Dubstep music in India. With releases on international labels like Ultragore Recordings, Soviet Recordings, Better Than Records, Monkey Dub and Complex Drop Recordings and a much deserving Beatport #28 on the dubstep charts, Paranox marks his debut on Aaroh Music with a trap bombshell – I’m so Gangsta !

Surgeffectz is a producer/DJ trio of Siddharth Bohidar, Dwayne Xavier and Arvind Ramprasad. They have previously released originals on Dirt Lies & Audio and Pop Rox Music. After playing an amazing set at Go Madras VI and topping the demo drop charts with their smash hit big-room single in collaboration with Chennai based Max Level, ‘Moonrocker’ is all set to release on Aaroh Music.

LFOs is a 4 piece producer/dj band from Mumbai. Only a year since its formation, LFOs have released quality tunes on quite a few labels worldwide, proving that they indeed have a promising future in store.

With their bigroom single ‘GO’ , LFOs brilliantly mark their debut on Aaroh Music.

You can check out the entire EP below.