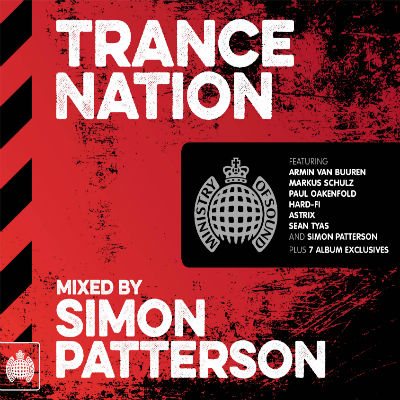 April 5th saw the release of the much-anticipated 2015 instalment of Ministry of Sound’s genre defining series.

Now in 2015 Ministry are proud to welcome the one-of-a-kind legend Mr. Simon Patterson to, in the words of MIXMAG, “the Super-Bowl of trance mix-comps”.

Achieving both underground kudos and mainstream acclaim, Patterson is a DJ & producer who has earned his place as one of the most celebrated names on the global trance scene, with an unbroken 17-strong run of Beatport Chart #1s.

‘Trance Nation Mixed By Simon Patterson’ features 36 incredible tracks personally chosen and imaginatively mixed by Simon, including no less than 7 global exclusives. Expect music from main stage stars such as Armin van Buuren, Markus Schulz, Paul Oakenfold, Astrix, Sean Tyas and others, as well as the cream of the crop from trance’s Class of 2015.

Naturally, Simon’s own studio work is in no short supply either, including exclusively his remix of ‘Fire In The House’ from indie-rockers Hard-Fi, his forthcoming MoS cut ‘Drop The Bass’ and five other massive tracks & reworks.

Also expect the hottest ammunition from the world’s most prominent trance stables such as Perfecto Fluoro, Enhanced, Armada, Black Hole Recordings and VANDIT.

Pick up your copy early through iTunes and take advantage of the pre-order discount price and 3 instant-grat exclusive tracks in the run up to release on April 5th.

Simon’s journey from BBC Radio 1 music scout to one of the UK national broadcaster’s own DJ / presenters is a tale of which dreams are made. Impressing no end with the on-point tech, trance & psy blend he applied to his ‘In New DJs We Trust’ run led him to a Radio 1 residency show last year. That independent musical mindset and a stylistic mix approach, ranging “from the mellow to in-your-face raging!”, is one that Simon now applies to the nth degree on his ‘Trance Nation’ release.

“What I’d like people to experience from this album is the kind of journey you would get when I play an extended six or seven hour set at my ‘Open Up’ tour nights”, says Patterson. “As it begins, you get a little bit of tone through, which then expands and expands into a mass of sound, when the lid is finally cracked wide. This album is an insight into my broad electronic musical tastes and is a progressive build in the traditional (and very real) sense of the word.”

A direct reflection of those eclectic musical tastes, his mixes slalom fluently between the deep, tech & tough trance strata, embracing harmonic, melodic and euphoric elements and – without missing a beat – up into Goa & Psy extremis.

Disc 1 immediately puts that into sharp perspective with the electro-lining brio of Tyler Michaud’s ‘Life In The Breakdown Lane’ and the hard-yet-grooving ‘Future Past’ from Kyfu. Matt Heanes lends a Jimmy Somerville-like quality to Alistair Albrecht’s ‘Once More’ and there’s an equally distinctive vocal touch from Hard Fi’s Richard Archer on Simon’s kinetic remix-reformation of ‘Fire In The House’. He traverses with equal élan between uplifting apparatus like Arjonas’ ‘Symbols’ & Alex Di Stefano’s ‘I’ve Got The Power’ and the seraphim vocals of Tiff Lacey (and remix punch of Markus Schulz) on Oakenfold’s classic ‘Hypnotized’. The first mix achieves full & final roof-removal with Patterson’s serrated rework of Armin van Buuren’s floor slam ‘Ping Pong’.

At the outset of the 2nd disc Simon pulls on his ‘Psymon’ mask, taking the mix’s thread way out East, with the Goa-inflected turbulence of Gaudium’s ‘Wrong Theory’, Sonic Element’s ‘Evolve’, Astrix’s ‘Sapana’ and others. Patterson’s own ‘Drop The Bass’ and peak-time exclusive cuts from Eddie Bitar vs. Fady & Mina, Harmonic Rush and XGenic & Proyal keep it running on the red line. Reaching the crescendo, he drops male, female and vocoded vocalism with ‘The One’, ‘Time Stood Still’ and ‘Whites Of Her Eyes’.

‘Trance Nation Mixed By Simon Patterson’ is out now!

10:Future Disciple – The Mayans Are Coming Back [Perfecto Fluoro]

05: Runa vs. In Progress – Saam (Under This Remix) [Expand Records]