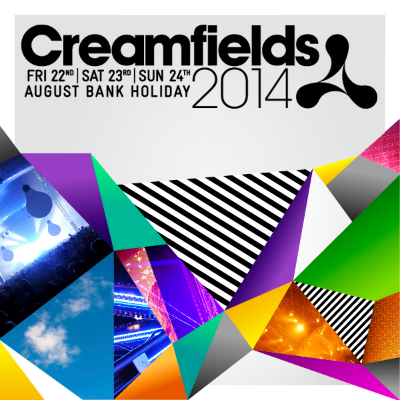 Voted the UK’s number one dance festival at the UK Festival Awards, Creamfields have announced the Phase 1 of the 2014 line-up which includes headliners like Tiesto, Deadmau5, Armin van Buuren, Hardwell and some of the most iconic names in electronic music from across the globe!

Inspite of the influx of dance festivals to bless the UK of late, few have topped that of Creamfields. Following one of its most successful years to date, the festival makes its larger than life return to the Daresbury countryside August 23 through 24. Avicii and Deadmau5 take the reigns of Saturday’s headline action, with Calvin Harris and Tiësto holding the fort for Sunday’s main stage activity.

Stage hosting duties are more than often the bigger pull for the annual two-day musical extravaganza, with 2014 reigning as no exception. Saturday sees such regulars as Size Matters, Pryda and Annie Mac Presents, along with first timer Revealed Recordings, who is bringing all the new age talent you would expect from the chart-topping Dutch label.

Axwell and Sebastian Ingrosso will bring the cream of their respective musical crops to the Departures Stage on Sunday, with both Mixmag Presents and Mista Jam Presents: Speakerbox stages collecting a diverse array of talents for the festival’s final day.

Check out the line-up below and visit Creamfields official website for more information and tickets.