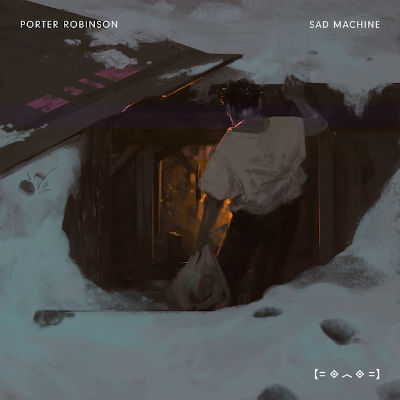 Porter Robinson has made no secret of the fact that his upcoming debut album Worlds won’t be a “DJ friendly” collection of club bangers. The LP’s first single, “Sea Of Voices”, eschewed the ‘drop’ for a build that essentially lasts the entire song, earning comparisons with the likes of M83 and Explosions In The Sky. Now comes its follow-up “Sad Machine”, which you can hear over at Fader or in the SoundCloud embed below. A pop-tinged electronic excursion that stretches over six minutes, “Sad Machine” utilizes singing voice synthesizer Vocaloid, and an impromptu vocal performance by Robinson himself.

“I’d used Vocaloid as the vocals for several of the songs on Worlds, and then the idea of a duet between a lonely robot girl and the human boy who encounters her occurred to me,” the producer told Fader. “I didn’t have much time before I had to turn in the entire album, so I just sang the male parts. I wanted something that felt distantly sad, a little cute, surreal, hopeful, and maybe somehow evocative of fiction?”

We can expect to see much more of North Carolina’s wunderkind once the album drops. Robinson has spoken about embarking on a live tour beginning close to home about a month after we’ve all heard Worlds. “The first place it goes on tour will be the United States, because that’s naturally where you go,” he told inthemix back in March. “I plan to take it to a bunch of key festivals – and I don’t mean dance festivals.”

Check out “Sea Of Voices” below!

Check out “Sad Machine” below!