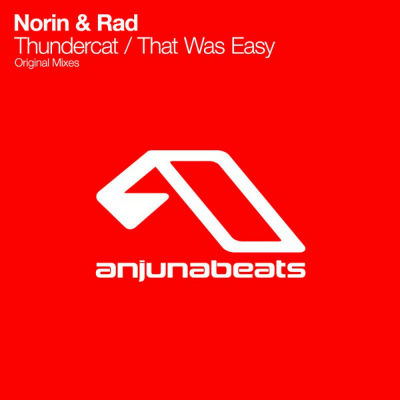 Norin & Rad is a name you better get used to hearing. Tipped as stars of the future by Above & Beyond back in 2011, Bruce Karlsson and Nick Sember have lived up to that billing and more. Since their breakthrough smash “Bloom”, the Californian upstarts have been producing the most futuristic trance-influenced grooves and progressive EDM around with a string of Anjunabeats anthems such as “Zion”, “DeVas”, “Pistol Whip” and “Five Finger Death Punch”.

Debuted at Above & Beyond’s ABGT050, Thundercat is a peak time release with electro chops, and massive big room sound. The LA boys have come up with an explosive release that has been supported by the likes of Leon Bolier, Audien and such. With a progressive groove, there’s a melodic and uplifting respite in the track which then breaks full throttle into a massive drop.

That Was Easy on the other hand, is completely manipulated with electro synths and samples with a groovy bassline and some twisted sound samples. Coupled with the male vocals that come in at just the right moments, this track is more of an electro-house one with funky grooves and a phenomenal breakdown. Another very tight release from Norin & Rad! Check it below and grab it on Beatport(Thundercat/That Was Easy).