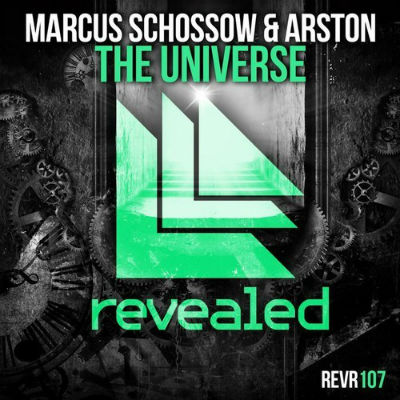 As one of the most influential labels in progressive dance music, Hardwell’s Revealed Recordings soars onwards and upwards in releasing music from the most exciting talents, around the globe.

Hailing from Sweden, Marcus Schossow has been an unavoidable name in the dance music big leagues since his early releases across major labels, including Size Records, Spinnin’ Records, Axtone and Big Beat (Atlantic Records), gaining support from some of the world’s top record spinners including Steve Angello & Axwell.

The insanely talented producer joins forces with one of the most exciting prospects emerging from the scene; twenty-six-year-old Belarusian, Arston, to create ‘The Universe.’ Hailed as one of the freshest faces on the scene, Arston is already standing tall alongside his titanic peers, after only cutting his teeth with his debut set at Global Gathering last year.

Previewing ‘The Universe’ as an exclusive during his rousing guest mix for Steve Angello’s Radio 1 residency show back in March, Schossow catapulted Arston onto the superstar radars of those who matter. Reaching almost two million strong through this platform alone and solely previewing brand new material, Schossow’s evolved take on what was originally Arston’s ‘Avesta’, is a monster anthem of uplifting proportions! Check it out below and grab it on Beatport!

Music Akshay Bhanawat - March 28, 2020
0
Building upon the momentum accrued over the past year, Dabin’s latest release, ‘Hope It Hurts’, maintains his winning streak and serves as a remarkable...

EDM News Akshay Bhanawat - March 28, 2020
0
While we are all stuck at home in isolation, Amy Thomson, 45, who in her career has managed Swedish House Mafia, Seal, DJ Snake...
ABOUT US
What started as an interest, slowly turned into a passion, and before we knew it, we had curated and founded a thriving community of avid electronic dance music lovers.
FOLLOW US
© Copyright 2020 - T.H.E Music Essentials