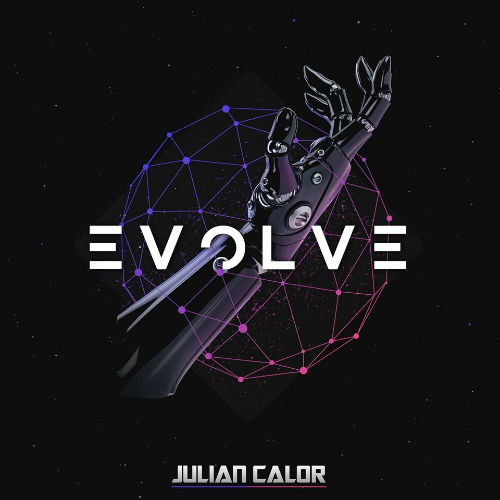 Trust Julian Calor to raise the bar with every production. ‘Evolve’ brings a lot more on the table than you’d expect. With talent that exceeds beyond his years, there’s a firm indication that the 21 year old wunderkind is just getting started. Julian garnered massive DJ support from the biggest DJ’s on the planet, more so, when he signed to World no. 1 DJ and fellow Dutchman, Hardwell’s Revealed Recordings imprint.

While his beatport chartbuster ‘Typhoon’ made the right kind of noise, being played at almost every major dance music festival, it was only but imperative that Hardwell, himself, offered the lad an opportunity to bring a unique bunch of tunes in the form of an album. Sooner or later he was destined for big things.

‘Evolve’ comprises 2 odd years of Julian’s own vision and hardwork, set against the backdrop of his own unique blend of Electro and Progressive House. With a firm grasp on his experimental ability, coupled with Julian’s signature synth culture and melodies, “Evolve” is sure to propel Julian Calor to dizzy heights.

‘The album is called Evolve because that is what I experienced during the making of this album , I started producing Hip Hop tracks 7 years ago and House Music 3 years ago, my sound evolved’ – Julian Calor

Evolve is set against a backdrop of Julian’s experimental abilities, while capturing the listeners attention with dreamy synths and cool composure, and at the same time, the energy and dance floor fervor. Right from the mid tempo beauty, ‘Another Template’ to the mainstage anthem, ‘Cell’, there’s everything in between that we’d hoped there would be. His smash hit, ‘Typhoon’, got a much awaited vocal makeover with Channii on the vocals for ‘One Shot (Typhoon)’. The lead single ‘Evolve’, released first up charted in the Beatport top 10 at no.3 which garnered massive DJ support and radio support worldwide.

Another highly impressive offering is the collaboration with the talented, Quilla, who is no stranger to dance music success herself and also features on various beatport chart toppers. ‘To The Core’ is a down tempo, electro infused masterpiece featuring a striking vocal, steering the album into a whole new direction. Then there is ‘Missing’ featuring a complex yet riveting pool of melodies blended with Julian’s technical expertise. ‘Sorcerer’ on the other hand is a hard hitting, dirty electro tune brimming with complex saws and heavy synths.

You can stream the entire album below.

There’s everything a modern dance music listener can look forward to with this album, more so with the futuristic tunes and incredible soundscape, furthering Julian Calor’s cause as a man of many talents.
With an ear for detail and a vision for big things to come, Julian’s body of work is recognized as a testament to what’s next for dance music.