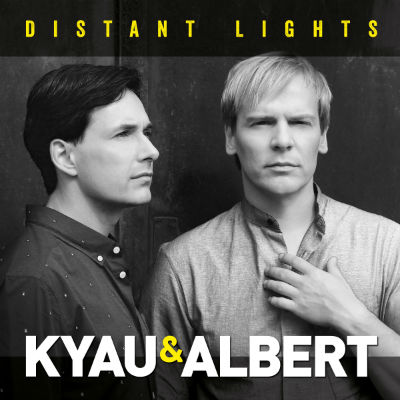 Having been around for almost two decades in the dance music industry, German duo Kyau and Albert recently released a brand new album titled ‘Distant Lights’. Read on to hear our thoughts about their latest offering.

“One” features Stoneface and Terminal, and has an addictive plus brilliant melody. Vocals on this track are also great.

“It’s Always Been You” features the vocals of Adaja Black, and the track is structured around her vocals. You can soon figure out why, as her voice makes you fall in love with the track.

“So Easy” features beautiful vocals by Steven Albert. The calming vocals make the track so nice and peaceful to listen to.

Albert also lends his voice to “Relevant Angel”, which is an equally good track to listen to. It was recently featured on Armin’s A State Of Trance radio show.

There’s also a bit of dubstep in the album, with the track “Follow The Waves” showing that Kyau and Albert can take on any genre and somewhat do justice to it.

“Let The Thunder In” is a change from the previous tracks of the album which were uplifting and melodious. This track goes a little deeper in emotions, and Neev Kennedy has done very well with his vocals.

Maria Nayler shows up on the track “Calming Rain” and makes it an exciting track to listen to. The track resonates the uplifting and elevating vibe of most of the album.

“Down” is full of feel, and much credit should go to the singer Sofia. It’s really a very lively track. Also received support from Above and Beyond on their radio show.

Energetic tracks on this album include “Are You One of Us” and “The Same”. These are definitely meant for the festivals and will get all the ravers grooving.

“My Silent Heart” is a track on the lower bpm side, and is the ideal chill track to listen to. The vocals are beautiful and blend in well with the piano melody.

“A Million Different Stars” is different from the rest of the album. It’s dominated by drum sounds, and has an exciting melody that keeps you engaged with the track.

“What You Don’t Know” is again, a slower track. The vocals are decent, but the track doesn’t make a strong case for a repeat listen, and is one of the weaker links of the album.

Overall, it’s an album Kyau and Albert can really be proud of. A good album is a very difficult thing to successfully pull of these days, and they’ve done it convincingly. A victory for trance music this.