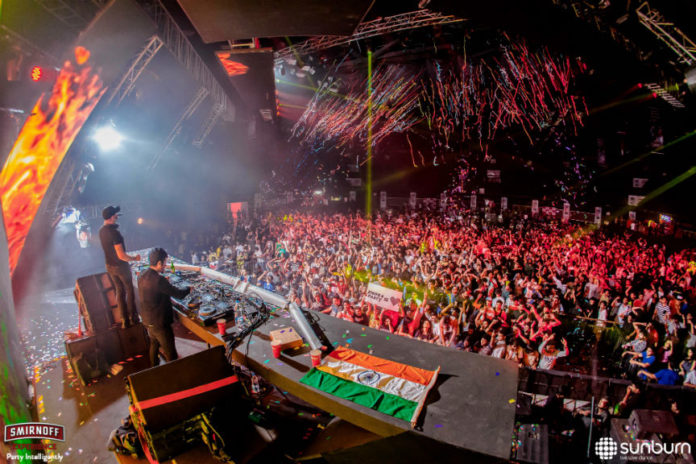 The Smirnoff Experience with Knife Party, Bloody Beetroots & more, curated by Sunburn Festival, was billed as a real party for the real party animals. A party where people have the most fun when they #unfakeit i.e. follow their instinct and not the herd. A party where people do not care what others think of them as long as they themselves are having a good time. Ohh and there’s one more thing Smirnoff Experience prides itself on, bringing you the best in music along with a visual sensory experience. If I had to combine all the above elements and bring them out via a “party”, “Smirnoff Experience with Knife Party, Bloody Beetroots & more” would probably be the answer. The venue was filled with different posters providing different snippets as to what #unfakeit stands for. If any person was still not convinced with the idea of #unfakeit (via pre-buzz, online promotions, contests etc.), the venue would probably have done the trick. Trust me when I tell you this, we have all heard this before. However, when I heard about the eagle stage pre-event, I was really interested in knowing the damage it could cause. And after witnessing it first hand, it did not disappoint! Now moving on to the line-up, we had Kris Correya kicking things off soon followed by Sandunes. To be fair to them, the crowd was still on its way during their sets. However, some of us were lucky to have reached the venue on time. Their sets played a perfect role of dishing out good bass music for the pleasure of those who were present, while setting a strong foundation of what was to follow. Soon to follow was Dualist Inquiry whose skills on the guitar and the decks have mesmerized dance floors across the country. This was the first time I witnessed this Guy perform and needless to say I was left wanting for more. Next up, was the person who is known for smashing dance-floors wherever he performs, Sound Avtar. Again, this was the first time I was watching this guy perform. And I think he personified “damaging dance-floors” brilliantly. Be it his set which was a perfect mixture of dubstep and bass music, or his infectious energy behind the decks, he definitely played a part in energizing the crowd and left them wanting for more which played itself perfectly for headliners, Sir Bob Cornelius Rifo, aka the Bloody Beetroots and Knife Party. Soon, it was time for Sir Bob Cornelius Rifo, aka the Bloody Beetroots. Debuting in 2006, The Bloody Beetroots have been behind some of the most riotous, thumping electro-house on the scene. The project is well known for the black mask they wear during performances. His identity remains largely anonymous. After watching him at the Smirnoff Experience, I would say its pretty easy to identify him.

Whenever you see a guy behind the decks wearing a black mask, drop some of the best electro-house music you are ever going to come across, successfully interact with the crowd be it via shouting himself hoarse on the mic, use the space around the decks perfectly by dancing and jumping while galvanizing the crowd, or dancing with the crowd itself, IT HAS TO BE SIR BOB CORNELIUS RIFO, AKA THE BLOODY BEETROOTS. And finally, as the host for the night perfectly captured, it was time for the DJ/Producer duo who had risen from the ashes of electronic dance music’s dark history. Enter: Rob Swire and Gareth McGrillen, popularly known as Knife Party. Considering they were the headliners, their music is known to almost the entire contingent of dance music fans across the globe, their EPs are known to break records, their tracks are deserving of the world wide recognition that they so ardently get wherever they go, if anyone will ask you what is the one thing about Knife Party which you feel is something that you didn’t expect, it probably would be tough to answer. After witnessing their performance, the answer (atleast to me!) was pretty clear –THE SPEED AT WHICH THEY MIX TRACKS!. To say that the speed of mixing during Knife Party’s set is fast would be an understatement. It was unbelievably fast and furious (they seriously should be considered for the 8th instalment of the Fast & Furious series!). When the set kicked off, I actually made an attempt to count the number of tracks being played. 30 minutes into the set, I gave up! The best part of this was that while there were too many tracks being played, the set didn’t interfere with the experience that a fan was going through. It only added to it! Special shout-out to Gareth who acknowledged my fracture and forgave me for not clapping my hands too often. It certainly was a superb performance from the duo and its clear to see why they continue to have massive support across the globe. All in all, this was a party which promised, an #unfakeit theme, the best in music, a visual sensory experience and overall, a real party for the real dance music fans. Considering the way everyone present danced and danced and danced, I would say this was one party which lived upto its billing.

Kudos to Smirnoff Experience and everyone involved. :)