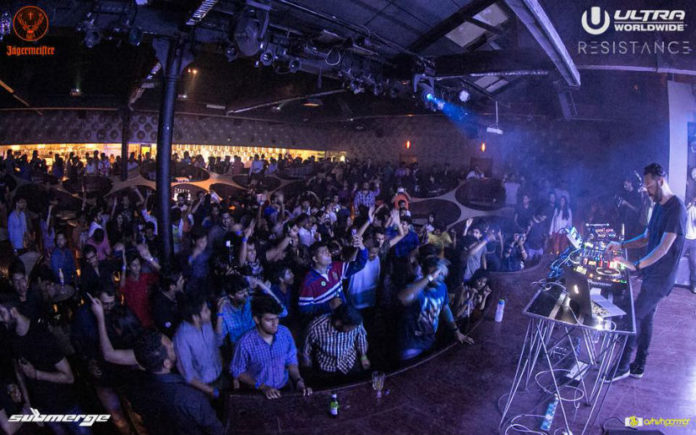 The Ultra Worldwide Resistance along with Nic Fanciulli was slated to be a flawless success for the fans of the underground scene. If you look at all the surrounding facts, this was a gig which every underground fan in Mumbai wanted to be off the hook!

You had India’s much loved proficient music maker, Nikhil Chinapa along with his long standing partner, Hermit Sethi plus the Submerge team working tirelessly to bring a mind blowing concept to India. What’s more is that this was the first time Ultra was making its presence felt in India. If that wasn’t enough, the concept involved Grammy nominated producer, Nic Fanciulli and one of the finest techno exports to come out of India, Tuhin Mehta. Submerge has always been championing quality dance music with the focus being more on quality than quantity. This was their chance to not only prove this statement but to also provide every dance music fan with an unforgettable memoir. All in all, this was a gig which was slated to be one of the major highlights of dance music in India. And you know what? It was every bit wonderful and every bit refreshing as was promised.

One of our members, Yohan Tengra was lucky enough to attend the gig. Here’s what went down at the Ultra Worldwide Resistance with Nic Fanciulli. 🙂

1. First of all, the fact that the gig was held on a Wednesday night had me wondering whether it would really have the desired impact. And to actually witness that sort of impact was really unexpected, unusual plus greatly refreshing and welcomed. This just proved that the underground scene in Mumbai is doing really well.

2. “The headliner can only shine if the opening act does his bit.” For every DJ out there, this would seem very relatable. One of the main reasons for last night’s success was Tuhin Mehta’s brilliant plus groovy set.

3. The highlight of the night was Nic playing “Billie Jean”, the Sasha remix of “Hey Now” by London Grammar and Cirez D’s “On Off” which made fans lose themselves in the killer vibe that had taken over.

4. If ever there was a moment which captured how good the gig was, it was when Nikhil took the mic at the end of Nic’s set, and asked “Do You Want More?”. Let me not get into what the fans chanted. However, it resulted in Nic playing two more tracks. A win for fans of the underground and techno, this. Considering how commercial dance music has become in recent years, this is the refreshing change which every dance music fan who has been a part of the scene for long will hope to attend every once in a while.

Kudos to Nikhil Chinapa, Hermit Sethi, Submerge and everyone involved in pulling this off. Let’s hope for a few more of these. 🙂