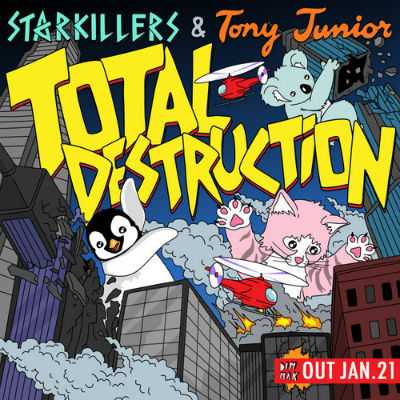 U.S talent Nick Terranova AKA Starkillers has been cutting a swathe through the bolshier end of the global house music scene with his tough-edged, eclectic sound and is set to release ‘Total Destruction‘ with Netherlands based DJ Tony Junior on Steve Aoki’s Dim Mak Records.

Starkillers is responsible for that perfect blend of high-octane, fierce energy and accessible appeal, blending big hooks and riffs, thumping beats and mind-bending effects trickery which has made him The DJ to collaborate with. Following on from his first official release of 2013 with fellow producer Dmitry KO and vocalist Amba Shepherd with ‘Let The Love‘ which dropped on the formidable Dutch imprint Spinnin’ Records, premiered by BBC Radio 1 and DJ Tiesto, notching up over 2 million youtube hits, Starkillers returns this time with Tony Junior with their huge ‘Total Destruction‘ release.

With upcoming releases, remixes, collaborations AND a major tour of his home turf in the USA, it is a breathtakingly busy and exciting time for Starkillers, kicking off with ‘Total Destruction‘, watch this space and take a listen now!