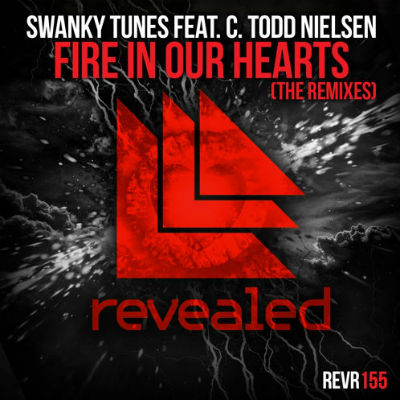 With their remixes of long withstanding Revealed favourite ‘Fire In Our Hearts’, Joey Dale and Arston are leading Swanky Tunes & C. Todd Nielsen’s new-school classic, into unpredictable and rousing territory.

Released back in May of 2014, the original mix of ‘Fire In Our Hearts’ was a high-velocity, dance-floor filler with soaring vocals to boot, that climbed to #4 in the Beatport Progressive House Chart. Making his Revealed return after the huge anthem ‘Symphony’, Belarus-based Arston shakes up the known blueprint of electro-house, his charging force of beat patterns coupled with atmospheric breakdowns that make for a no-holds-barred future banger.

Revealed youngster Joey Dale has been parading his inimitable variety of progressive productions around the globe, from festival fields to the heaviest of party settings, 2015 is set to be Dale’s breakout year with his well-received ‘Zodiac/ Gladiator’ EP, already causing fans to perch on the edge of their seats for what will be next on his agenda.

Now, premiering his edit of ‘Fire In Our Hearts’ via label boss Hardwell’s Hardwell On Air radio show, Dale instigates hands-in-the-air euphoria via an infiltration of melodic mayhem, that was also a stand-out track on the scene-shaking ‘Sound Of Revealed 2014’ EP.

With ‘Fire In Our Hearts’ receiving live support and airplay from massive industry players including Tiësto, David Guetta, Markus Schulz and Ferry Corsten, grab your copy and keep the fire burning via Beatport on March 6th.

Listen to Swanky Tunes feat. C. Todd Nielsen – Fire In Our Hearts (The Remixes) below.