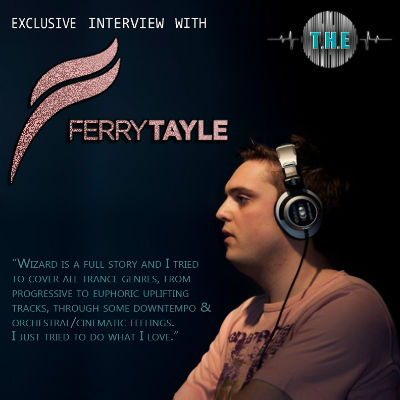 Ferry Tayle is now considered as the No. 1 French Trance DJ and he is the true representative of the pure, melodic & uplifting Trance sound. Labelled the French Wizard by ID&T, promoter of the “Trance Energy” brand in 2010, the name has stuck with him ever since. He made his debut on the label “Bonzai Records” alongside the legendary Airwave before continuing his way onto one of the biggest labels of the current trance scene: “Enhanced Recordings”. In a few years, he appeared in the largest European festivals like Tomorrowland, Trance Energy, A State Of Trance, Luminosity Beach as well as some of the biggest clubs and brands Worldwide such as Digital Society, Godskitchen, Gatecrasher, Technoclub, Pacha in New York and Driftwood in Ibiza. Meanwhile, his monthly radio show and podcast “Flightbook” on AH.FM is one of the leading shows in the trance section.

After listening to the album, we can definitely say that this is without doubt, Ferry’s best work till now! And we wanted to know much more about the album, regarding the different type of trance sounds, who inspired Ferry into producing an album etc etc! And boy are we glad to announce that we have managed to do it. Check out our interview with Ferry Tayle himself below! :D

T.H.E – After so many years of releasing singles and EPs, why did you think now was the appropriate time to finally put out an album?

Ferry Tayle – This is actually my 3rd artist album, but this is the one where I spend a lot more time and care to produce. There is not really an appropriate time for releasing an album, it’s all about the wish & the feelings. Sometimes I spend hours on the same track without making an improvement.

T.H.E – And what do you want to say to your fans with ‘The Wizard’?

Ferry Tayle – The Wizard is like a story, from the first to the last track. Every track is like a chapter. You really have to listen to the whole album in order to feel the various emotions in it. It’s not only tracks after tracks.

Ferry Tayle – In 2010, I played at the famous Trance Energy and ID&T (the promoter) called me the french Wizard. I kept the idea and worked around this!

T.H.E – By which artists were you inspired, in the process of creating the album?

Ferry Tayle – I am always inspired by different artists from different genres. It was mostly from guys like Giuseppe Ottaviani, Armin Van Buuren, Chicane, Hans Zimmer or a french guy call Stanislas.

T.H.E – What did an average day in the studio look like for you?

Ferry Tayle – I still have my day time job and to be able to spend time with my friends & family so I try to spend 2 or 3 days per week in the studio. But when I’m in the studio, I’m locked for 5 or 6 hours non stop, jamming around & working around my ideas!

T.H.E – With the first new single from your forthcoming album ‘The Wizard’ having been released to critical acclaim, the spectacular ‘Rescue Me’ featuring Erica Curran, when you put that track together, did you know you had something extra special there?

Ferry Tayle – When I received the vocal from Erica, I was stunned and I knew that the track could be good. But to be honest, when you produce a track, you never know that it could be a hit, and I don’t produce a track by thinking it should be a hit. But there are some voices that never fail, and Erica is one of them.

T.H.E – How best would you describe the sounds on the album? Is it something that a “Ferry Tayle” fan would identify himself with immediately?

Ferry Tayle – As I said above, it’s a full story, and I tried to cover all trance genres, from progressive to euphoric uplifting tracks, through some downtempo & orchestral/cinematic feelings. I just tried to do what I love.

T.H.E – You have collaborated with Daniel Kandi, Suncatcher, Driftmoon amongst others for your album. Tell us a bit about how those collaborations came about. How excited are you with the end result?

Ferry Tayle – Well, before the music, they are all friends and people I love the sound of. It was a great experience on each track and a bunch of fun too.

T.H.E – Is there anything you’d like to add about “The Wizard”, that your fans should know!

Ferry Tayle – I hope they will enjoy the album as much as I did to produce it!

Ferry Tayle – I hope soon, I have never played there in your amazing country so I want to come and see for myself!

Thank you Ferry for taking the time out for this interview! The album overall is highly impressive and one can see the effort put into this album. All one can wish for is to have the next Ferry Tayle album released sooner than four years, and to keep hearing more of such blissful music from him. You can get your copy of “The Wizard” here: http://www.beatport.com/release/the-wizard/1323230.