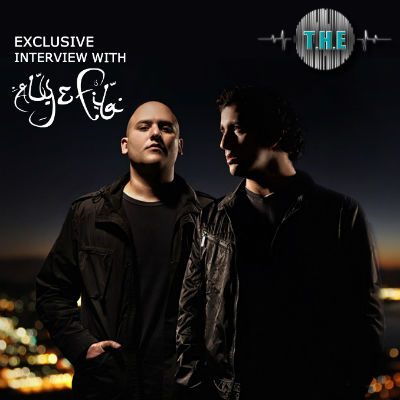 Last month heralded the day many had seen coming in the stars for years – the gathering of Trance Nation – “the Super-Bowl of trance mix comps!” (MIXMAG) and those club rocking ultras, Aly & Fila. Former compiler/mixers of the multi-million selling Trance Nation series have included UK DJ eminence like Above & Beyond, Lange and Andy Moor, as well as Euro-heroes Ferry Corsten, Cosmic Gate and Rank 1. Now, joining that illustrious list, and for the first time bringing the series some Eastern spirit, Ministry of Sound are proud to welcome Egypt’s Aly & Fila to the Trance Nation honour roll. Past masters of the soundly rocked club, arena & festival and perennial Top 20 favourites in DJ Mag’s annual poll, they now bring their sonic (fire)brand to Trance Nation.

We managed to catch up with Aly & Fila to discuss what went into the making of the legendary “Trance Nation” compilation, their thoughts on joining the illustrious list to have mixed the “Trance Nation” series, their favourite tracks from the edition and plenty more! Here’s what they had to say. Happy Reading. :)

T.H.E: Former compiler/mixers of the multi-million selling Trance Nation series have included UK DJ eminence like Above & Beyond, Lange and Andy Moor, as well as Euro-heroes Ferry Corsten, Cosmic Gate and Rank 1. How does it feel to join the illustrious list?

Aly & Fila – We are very honoured to now be among this great list of Artists who have mixed the Trance Nation compilations over the years. We played on repeat the original volumes by System F – Ferry Corsten, they were groundbreaking in terms on Trance Compilations.

T.H.E – Your sound has best been described as “Uplifting” over the years. Is that something we can expect from the Trance Nation compilation?

Aly & Fila – 100% , the compilation is very much our sound, melodic uplifting pure trance.

T.H.E – For the Trance Nation tracklist, you Guys have sourced some of the scene’s hottest young prospects. Tell us a bit of which Trance DJs have impressed you the most in the past 18 months!

Aly & Fila – There are so many great up and coming Trance Producers in the world , each week there is a new producer coming to fruitition , its great for the scene. Hazem Beltagui, Neptune Project, Will Atkinson, Andres Sanchez, Omar Sherif, Mohamed Ragab, Matt Bukovski, Fady & Mina, Ferry Tayle, The Noble Six, Re Order & Standerwick, the list is endless!

T.H.E – The early to mid-sections of Disc 2, bring an onrush of upcoming “Future Sound Of Egypt” releases like the irrepressibly spirited ‘Unbreakable’ from Temple One, the gravity resistant synths of Will Atkinson’s ‘Eternally’, ‘Sailing Airwaves’ – ReOrder & Ian Standerwick new SkyPatrol’s outing and Standerwick’s own ballistic ‘Valyrian’. Tell us a bit more about those upcoming releases!

Aly & Fila – Each of them is great and unique in its own way , the producers behind them certainly have a great future, the tracks are very pure to the trance sound.

T.H.E – The Trance Nation compilation features work from numerous heavyweight trance operators, including the likes of John O’Callaghan, Thrillseekers, Lange, John Askew, Ronski Speed and, naturally, much you Guys as well. We would love to know the thinking behind selecting a tracklist for such a prestigious compilation.

Aly & Fila – We firstly appoached a lot of producers we know, are friends with, and to see what tracks they had that were possible for the Compilation , and thanks to them they were able to give us some amazing tracks. :)

T.H.E – Your favourite tracks from Disc 1 & 2 of the Trance Nation compilation?

T.H.E – Mixmag refers to the “Trance Nation” compilations as the “Super Bowl of Trance Mix comps”! How would you best describe it?

Aly & Fila – That’s a very good description, since the early 2000s Trance Nation Compilations have bee a minstay in trance fans albums collections from the early System F/Ferry Corsten ones to the Above and Beyond ones etc!

T.H.E – The “Trance Nation” compilations are best known for featuring tracks by well known Trance producers as well as up and coming producers. How important it is, according to you, to maintain that balance of including fresh talent so as to give the mix a fresh sound and feel, but at the same time, ensure that you have the genre’s trusted production legion in veterans who have been on the scene for quite sometime?

Aly & Fila – We felt with this compilation we were able to find the balance of the two, fresh up and coming talent with tracks from some of the biggest names in Trance!

T.H.E – Moving away from the compilation, we would love to hear your views on the current electronic music scene.

Aly & Fila – Its very healthy, EDM has opened up a lot of doors for all genres, especially in USA and Canada. There are Trance Families all over the world pushing and helping the genre, its amazing to see everywhere we go!

T.H.E – Egypt as a country has produced a lot of talent in the world of electronic music. One artist who has impressed you the most?

Aly & Fila – Hazem Beltagui – he is a great producer.

Check out the Trance Nation Minimix mixed by Aly & Fila below.