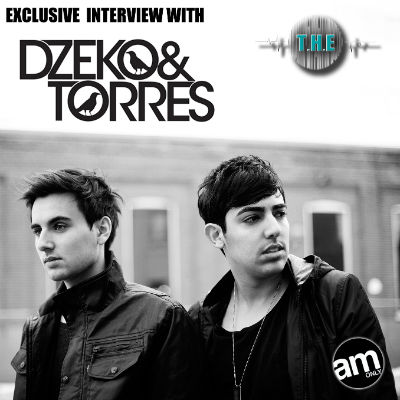 From the front row of a Tiësto show to a coveted spot on the Dutch megastar’s management roster, the story of Dzeko & Torres is equal parts dream and determination. The Canadian duo initially found each other through an online forum for Toronto club events. At the time, Luis (Torres) was working as a photographer and graphic designer, and Julian (Dzeko) as an event promoter.

The two became fast friends and began DJing around the city’s club circuit and producing together on
borrowed studio time while juggling part-time jobs. Their first electronic dance music moment of reckoning came at that Tiësto show, which provided a clarion call to pursue their musical passions full-time.

“Tiësto was our main influence and inspiration,” says Dzeko. “After we saw him at that show and playing on that scale, we knew we were interested in doing that too.” Throughout their stylistic evolution and swiftly growing success, the duo continually kept Tiësto in the loop by sending tracks and demos his way. Their perseverance paid off at the end of 2013 when their musical mentor signed them to his prestigious Red Light Management group, a landmark event that the duo don’t hesitate to call “a dream come true.” Their Musical Freedom debut “Highline” dropped soon after, showcasing the intuition for upbeat melodies that put them on Tiësto’s radar in the first place. The subsequent months have been a welcome whirlwind for Dzeko & Torres, who have supported Tiësto at his Hakkasan Las Vegas residency and even appeared alongside the superstar during his headline performance at Ultra Music Festival’s main stage. Teaming up with Tiësto on a marquee remix of John Martin’s “Anywhere For You” to accompany their
arsenal of forthcoming original productions, 2014 sports all the trappings of a monolithic year for Dzeko & Torres moving forward.

T.H.E – Music Encyclopedia got a chance to catch up with exciting Canadian talents, Dzeko & Torres! Check out our exclusive interview below where we talk about their inspirations, how did they get together and if not for DJing, what are their hobbies!

T.H.E – How did the two of you’ll get together and start producing?

Dzeko & Torres – Basically we met on this online-clubbing-community website thing. Then we both started promoting and working for the same company. Torres had been messing around on FL Studio on his laptop for a few months, and when Dzeko bought DJ equipment, we started spending a lot of time in Dzeko’s basement practising DJing. Then we set up a terrible little studio down there and bought our first ‘studio computer’ (which Dzeko ended up playing countless hours of Counter Strike 1.6 on). We would spend our summer days down there trying to get better at both producing and DJing.

Dzeko & Torres – A lot of people seem to think we got our names from them…which doesn’t make any sense at all…why would we decide to name our Electronic Music Duo after soccer players. I wouldn’t expect to see a Country band named Rooney & Ronaldo. Its a pretty weird coincidence honestly, but we seem to be doing okay anyways.

T.H.E – Which artists have been your inspirations?

Dzeko & Torres – We both grew up listening to electronic music (house, trance, techno, euro dance etc.) and so we’ve looked up to a variety of artists over the years…anything from Cascada, to Paul Oakenfold, or Carl Cox. The big ones have always been guys like Tiesto, Axwell (and the rest of SHM), Laidback Luke and a few others. Also Afrojack…we’ve been playing his stuff since we first started DJing and just to watch his growth is super inspirational.

T.H.E – What is the best part of working with each other?

Dzeko & Torres – Like in any team or partnership, each of us has our strengths. We both work hard at what we know better. Its also always great to have another person to bounce ideas off of…in production, branding, or even something as simple as Facebook posts.

T.H.E – Describe the feeling of playing at Tomorrowland 2013, a dream gig for Luis.

Dzeko & Torres – It was pretty incredible. The set was kind of surreal, we didn’t really grasp that we were playing at Tomorrowland. It really struck us when we were flying home at the end of the 3 days. The rest of the time we were just so busy running around, but on that flight we realized we’d just played Tomorrowland. It was a really rewarding feeling.

T.H.E – Your ‘Who Is Ready To Jump’ remix received a lot of attention from fans and DJs alike. How did it feel to have some of the most renowned DJs playing it in their sets?

Dzeko & Torres – That was the first track we had that was supported by a lot of people. It was amazing to see that people were actually able to use our music in their sets. It meant that we were doing something right and our music was actually good enough to play and make people dance…or jump in that case.

T.H.E – A lot of good talent has been coming through from Canada recently. Who according to you’ll is the next big Canadian artist to look out for in 2014-15?

Dzeko & Torres – There are a few. Hunter Siegel is the first that comes to mind…he’s really on fire right now. Really nice blend of the deep house sound and a touch of electro in there too.

T.H.E – What would be a dream collaboration for you Guys and why?

Dzeko & Torres – We’ve already pulled off our dream EDM collaboration when we did the track with Tiesto. Now i think we’re looking more towards doing something with a band. Maybe some one we’ve already remixed. Really love what guys like Imagine Dragons or Animal Kingdom are doing…would love to get them in the studio and just make some music.

T.H.E – What was the thinking behind the “10 Minute yearmix”? Did you Guys anticipate such a fantastic response as it has received?

Dzeko & Torres – The idea had already been done with like Top40 hits, but we hadn’t seen anyone do it strictly with EDM. Obviously guys like Madeon had come out and done amazing short mixes with tonnes of tracks, but no one had really done a year mix like that. We were not expecting it to get that much attention, but the one we did in 2012 had like over a million plays in total and the 2013 one passed that in like the first month! It really is incredible.

T.H.E – Apart from DJing and music production, what do you Guys love to do?

Dzeko & Torres – Eat good food. Good food is amazing! Also floor hockey is fun. Play a game whenever we are back in Toronto. And video games are great to. Can spend hours sitting and playing CoD or Fifa.

T.H.E – India has become one of the major destinations across the globe for electronic music. What is your take on it?

Dzeko & Torres – We’ve heard great things from fellow artists about the scene and the crowds. Would love to go out there and find out first hand.

Dzeko & Torres – Not as of right now, but it is something we were actually talking about recently. Maybe soon ;)