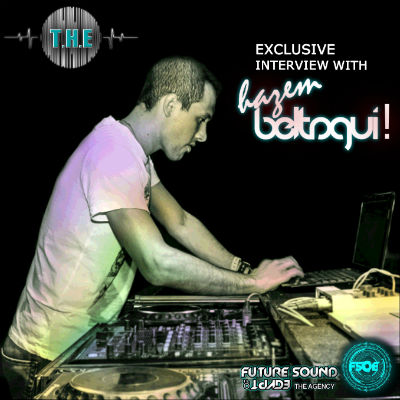 He’s become a bit of a regular on A State of Trance, very recently having his tracks played on ASOT 650, 651, 652, 653, 654 ,656 & 657! He became part of the elite trance artists to have played on the A State of Trance tours, with his ASOT 650 performance. Armin himself mentioned him as an artist to watch out for on a couple of occasions, and calling him ‘one of his favourite innovative artists’. T.H.E – Music Encyclopedia got a chance to catch up with exciting talent, Hazem Beltuagi. Check out our exclusive interview below where we talk about the dance music scene in Egypt, Hazem’s passion for electronic dance music and what we can expect from him in 2014!

T.H.E – What is the electronic music scene like back home in Egypt?

Hazem Beltagui – Actually the electronic music scene is quite big in Egypt, especially the trance scene, really amazing the amount of support i get there.

T.H.E – Were you always musically inclined?

Hazem Beltagui – Music has always been my biggest passion, but only as a listener up to 2009, i have always been dreaming about being a musician but didn’t get the chance to learn any instrument but i was listening to music literally all the time.

T.H.E – How did you discover electronic music?

Hazem Beltagui – It was totally random actually, a friend of mine made me listen to Deadmau5’ music back in 2008, i think it was “Move For Me” that got me completely hooked.

T.H.E – Will you ever try going back to progressive house?

Hazem Beltagui – I have started a side project called “Hazem Beltagui Pres.H4Z3” under which i m still working with deeper and proggier music but my main focus is the trancier side now, to be honest. I think my early progressive house stuff was leaning towards trance a bit more than the usual prog house sound anyway.

T.H.E – Any other genre you wish to try out sometime in the future?

Hazem Beltagui – I will probably include some ambient and liquid drum’n’bass in my artist album, love those styles as well.

T.H.E – One festival you’re really looking forward to playing at?

T.H.E: One recent track that you’ve been playing a lot!

T.H.E – One artist you’d like to work with sometime in the future!

T.H.E – How are your labels doing? Any upcoming tracks you’re excited about?

Hazem Beltagui – The labels are doing really good, there is actually a new one on the way too, set to launch in june and that’s all i can say for now.

Hazem Beltagui – Last year I have been working on a lot of music, so this year I am trying to focus more on touring and spread the melotrance love all around the globe. Still, I am working on new projects, mostly vocal tracks with amazing singers such as Susana, Neev Kennedy, Aneym, Jennifer Rene just to name a few.

We would like to thank Hazem Beltagui and everyone involved for giving us this opportunity to learn more about the DJ/Producer who is on his way up and destined for big things in 2014. Hope it provides you Guys with a refreshing insight about Hazem Beltagui. Share this interview with your friends and tell us what you think about this interview in the comments thread below!