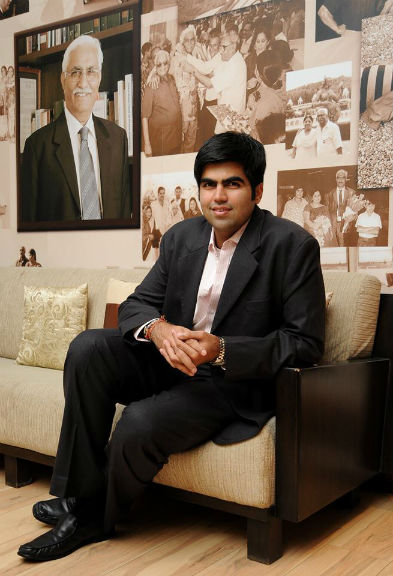 The leading power house and pioneer of dance music in India, Sunburn is celebrating the 50th episode of their iconic online radio show and a household name in the dance music industry – Sunburn On Air and that too with some electro-tinged festival rhythms!

India’s premier electronic music brand will for the very first time be presenting dance music’s monster radio on-ground event titled #SOA50 that will mark a milestone for the brand and will be broadcasted live across the globe via sunburn.in, uniting millions in every continent.

Karan Singh is the son of Harindra Singh, the Vice Chairman and Managing Director of Percept Limited. He is currently the CEO of Sunburn, a Percept Intellectual Property, Asia’s largest Music festival and among the worlds best.

We recently got the the chance to speak to Karan about a variety of topics including the launch of the “Sunburn On Air” radio show, exactly what fans can expect from it going forward and how Anish Sood was entrusted with responsibility of hosting this radio show. Read on to know what he had to say. :)

T.H.E – Hi Karan! Firstly, congratulations on reaching 50 episodes of #SunburnOnAir. Massive achievement there. We would like to know how did the concept of “Sunburn On Air” radio show came into existence?

Karan – Being the leaders in the segment of EDM it is our endeavor to expand the category and educate the youth about this category of music. Also it was a natural progression for us to take the music from onground and popularize it across other medium to have an effective and far more impacting reach. Therefore “SunburnOnAir” was conceptualized.

T.H.E – Considering that India has grown exponentially in terms of a market for #EDM artists across the globe, did this insight play a role in launching your own radio show to cater to the ever growing needs of dance music fans in India?

Karan – EDM is, unapologetically, the music of the screenagers, the generation of today. A generation of music fans is shifting their choice of music from the hip-hop driven popular music to the polished sounds that fall under the umbrella of EDM. Sunburn’s growth over the last eight years is hard evidence of EDM’s acceleration into a genre that is viable in terms of fans and brands wanting to interact with fans..Also India with its 600 mn youth population, is a huge potential market waiting to be explored by the global artists thereby making Mumbai, Delhi, Hyderabad, Bangalore, Chennai, Kolkatta and Pune the first choice of cities for their appearance. Having said that Sunburn has already demonstrated effectively via Sunburn reloads that EDM is a phenomenon which is equally revered in cities like Raipur, Indore, Surat, Trivandrum etc…

T.H.E – The name, “Sunburn On Air” is very similar to Hardwell’s radio show, “Hardwell On Air” which prides itself on providing the best and the latest in EDM every week. Is that the objective “Sunburn On Air” strives to achieve? If yes, how exactly do you plan to achieve this considering that almost every artist has his own radio show and similar objectives?

Karan – Why only Hardwell several such shows exist globally. Sunburn is a local grown phenomenon now at par with Tomorrwland and Ultra Miami festival as per the latest International Music Summit 2014 report. The show is anchored by our well known homegrown talent DJ Anish Sood and is unique in the format of being a mix of tracks by national and international DJs. Content wise it has a vast variety for audience listening entertainment.

T.H.E – Armin van Buuren’s radio show, “A State Of Trance” has a global tour planned every time it finishes 50 episodes. Could we expect something similar from “Sunburn On Air”, not just within India but across the globe in the future?

Karan – Yes ofcourse these are initial steps that we have taken in the direction of popularizing this segment in India and we can already see the results in SunburnOnAir having the largest number of downloads on itunes.

T.H.E – Anish Sood is responsible for hosting the “Sunburn On Air” radio shows. Tell us a bit on how this came about.

Karan – Anish Sood has been associated with Percept Live and Sunburn from the very beginning itself and the relationship has only fructified and matured in the years to come. He is a fantastic artist, a much appreciated DJ by his fans and a great human being. It only made sense that we should further extend this relationship via asking him to be our resident DJ on our show.

T.H.E – Considering that you have achieved the first milestone of reaching 50 episodes, and are currently one of the most popular dance music radio shows in India, what’s next for #SunburnOnAir?

Karan – We are thrilled to have achieved this status on SunburnOnAir. What we do envisage it to be in future is a weekly podcast and become a full fledged channel with different formats of shows. We would like to promote EDM as a genre overall across the globe.

While we do not have details as to what exactly has “Sunburn On Air” planned for its fans, one thing is for sure, Sunburn On Air celebration events will definitely have a game changing experience. You can witness that for yourself by booking your tickets for #SOA050 with W&W here.