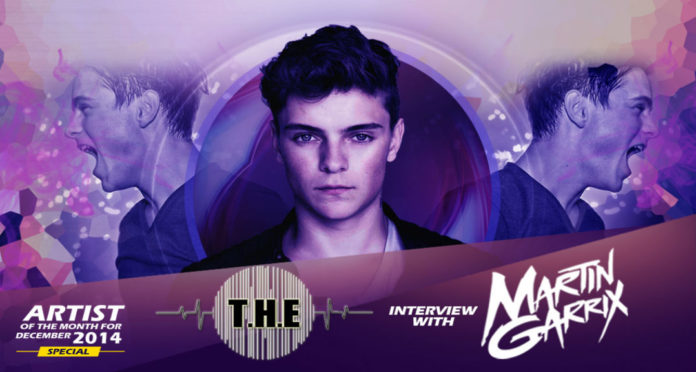 Martin Garrix may not be a superhero or a secret agent, but he does possess two identities.

A 18-year-old student by day, but when the sun goes down he can be found behind the decks in front of packed hotspots and festivals across the globe, fraternizing with electronic dance music royalty, tirelessly producing in the studio, and dropping records.

You probably know him for his monster hit ‘Animals’, that reached the #1 position in several countries worldwide including Holland, Belgium and England, as well as Top 5 in Australia, France, Spain, and Germany.

Following up the success of “Animals”, his remix of Dimitri Vegas, Like Mike and Sander van Doorn’s “Project T” got supported by the biggest DJs around, after which his track ‘Wizard’ with Jay Hardway ascended #1 on Beatport, making it the youngest artists ever to reach the top spot on Beatport’s Main Chart.

As part of our Artist Of The Month special, we managed to get a chance to catch up with Martin and spoke about Tiesto’s influence, his experience of playing at some of the biggest festivals across the globe, his top 5 Dutch DJs/Producers and plenty more. Find out what he had to say. :) T.H.E – Firstly Martin, congratulations on being voted as #4 in the DJ Mag Top 100 poll. How does it feel?

Martin Garrix – It’s really amazing to know that so many fans voted for me. I couldn’t believe it!

T.H.E – To what extent has your stint at the production school you went to helped your career?

Martin Garrix – It helped me to learn the basics to make a good production and with the technical aspect of making music. But making music is something I have done as long as I can remember so that was always in me.

T.H.E – How did it feel to have your remix for Christina Aguilera get an official release back in 2012?

Martin Garrix – It was so cool that they choose my remix. Nobody knew me back than so I didn’t expect it at all. When they called me to tell me I couldn’t stop jumping around haha.

T.H.E – You have always said that Tiesto was one of your early influences. Can you shed a bit more light on how exactly has he helped you become what you are? Do you ever see yourself producing trance music, which helped Tiesto gain worldwide recognition in the early stages of his career?

Martin Garrix – When I saw Tiesto for the first time I knew that was what I wanted to do as well. Since than I focused more and more on electronic music. I started making my own tracks in my bedroom and from there it all went very fast. I get inspired by a lot if different music styles, when producing new tracks so I can’t say that if I will ever make trance music. But for now it’s not really my style.

T.H.E – How has the experience of playing the main stage of the world’s biggest festivals been? Any particular festival that you enjoyed playing the most?

Martin Garrix – It’s always really cool to see so many people going wild on your music. It’s such a big compliment that they are there for you and that they love what you’re doing. Of course festivals like Ultra and Cochella are amazing experience. If you had told me a few years ago that I would play there I would have laughed at you.

Martin Garrix – That it is easy and everybody can do it. I work really hard for this!

T.H.E – Being pretty young yourself, which other young artist do you think is doing really well?

Martin Garrix – I’ve worked with Ed Sheeran who is doing really good. He makes amazing songs and he is such a cool guy! Also Dillon Francis is a great guy I really like his sound and it’s so much fun working with him. We became really good friends.

T.H.E – You played at a festival in India last year but recently did a full tour here. How was your experience? Did you know that only a handful of artists like Swedish House Mafia, Hardwell and yourself have had sold out shows in India?

Martin Garrix – Wow, I didn’t know that. That’s really cool! I really like India, the fans are amazing and the vibe was just amazing.

T.H.E – What else do you see yourself doing in the near future? Your own show concept maybe like Pryda,Deadmau5 and Armin?

Martin Garrix – I already have some big shows and festivals scheduled for 2015. I would love to do my own show someday. So who know when that will happen.

T.H.E – You’re from the Netherlands which as a country is known for giving the world some of the best Electronic Dance Music talent. According to you, which 5 Dutch DJ/Producers have had a massive impact on the EDM community globally over the past decade?

Martin Garrix – Of course big names like Tiesto and Sander van Doorn. They are big examples for me. But also younger guys like Afrojack, Oliver Heldens and Julian Jordan who are really changing EDM at the moment.

T.H.E – 2014 has seen a lot of albums from electronic producers. Are you considering working on an album anytime soon?

Martin Garrix – I’m working on some really cool projects at the moment. Who knows what will happen after that, maybe an album, I really don’t know yet.

T.H.E – Thanks Martin for your time. It was great talking to you. We would like to wish you all the best in all your future endeavours. :)