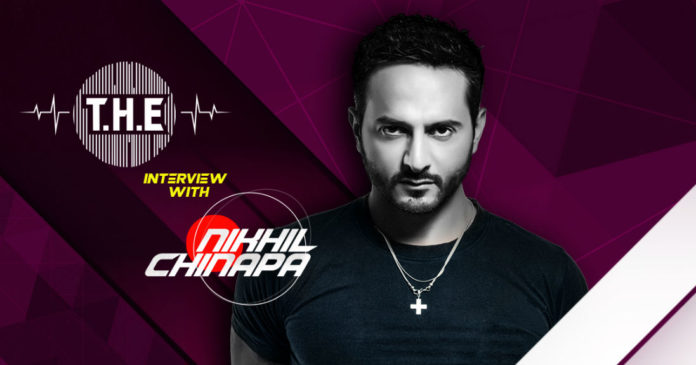 India’s much loved proficient music maker and connoisseur, Nikhil Chinapa along with his long standing partner Hermit Sethi of Submerge are bringing to Mumbai yet another mind-blowing concept on the 8th of April. What’s more? Ultra will be making its presence felt in India for the very first time and will give every dance music fan an unforgettable memoir.

We got the chance to speak to Nikhil about the role that Submerge played in getting Ultra Worldwide presents – The Resistance: Around The World Tour With Nic Fanciulli to the shores of India. Amongst other topics, he also discussed the current dance music scene in India and how Submerge plans to enhance it. Have a read. :)

T.H.E – Hi there, Nikhil! First up, congratulations on the big tour coming up! We’re very excited to witness the magic, that is, the Around the World Tour with Nic Fanciulli! So how did the idea of bringing a unique concept, such as this, to India, come about?

Nikhil – Submerge has been bringing new and unique concepts to India for many years now. From Fatboy Slim and Ritchie Hawtin’s maiden tours to India, to SHM’s One Last Tour – to iconic events with Above & beyond (TATW 450 / ABGT 001) and and Armin Van Buuren (ASOT 600).

Over the past few years as the Indian dance music scene has exploded, keeping pace with the global phenomenon of EDM, it’s largely been off the back of a mainstream sound which is what our audiences have been listening to. Ultra’s Resistance concept echoes Submerge’s own philosophy of going against the grain and breaks new ground in dance music by doing just that. The sound, the concept and the artist are all a part of an exciting alternative thought process – that of being amazed by something you didn’t even know existed.

T.H.E – Submerge has been associated with a number of iconic shows that have hit Indian shores these past few years. What can Dance Music enthusiasts and Nic Fanciulli fans look forward to, with this tour?

Nikhil – I’ve always said the best parties are the ones you’re surprised by. The one’s you walk into not knowing what to expect… and by the end of the night are left blown away and breathless by. Nic Fanciulli and Ultra’s Resistance have curated a night where unknown music and sounds are at the very core of the concept and that’s what I find most exciting! Just walk in with an open mind and comfortable shoes – and be prepared to cut loose on the dance floor with like-minded people!!

T.H.E – What is your opinion on the ‘Resistance’ concept by Ultra? Do you feel Indian festivals can implement a similar concept to provide festival goers with a new experience?

Nikhil – This concept though presented in a new manner, has actually been around since the birth of dance music. I’m talking about the Underground Sound. Frankie Knuckles was playing underground music when he gave birth to House music at Chicago’s Warehouse Club in the late 70’s and early 80’s.

This isn’t just a fad – it’s at the heart of all dance music. Evolution, mutation, collaboration, experimentation.. These are all key factors of dance music’s DNA. Mainstream music is fed by and comes from, the underground sound. You must bear in mind that anything mainstream didn’t start off as that – it mutated and evolved to get there. As we see the music scene in India grow, flex it’s musical muscles and draw more audiences to it, I expect a diverse range of artists across various music genres to make India a firm stop on their touring calendar.

As far as festival’s following this concept – if you look at all the lineups I’ve curated over the years, I’ve been doing just that since the beginning!

T.H.E – Any specific reason on Mumbai being the preferred destination for the tour?

Nikhil – You may have noticed that this tour is a mad dash across the world – 8 cities in 10 days!! While discussing city options for India, we had to choose a city that offered easy flight connections into and out of it. Mumbai was a natural choice and I’m very please to see it hosted in the city.

T.H.E – What can fans expect from the production of the show?

Nikhil – Submerge is planning on adding a few elements to The Blue Frogs already phenomenal sound and light system. Having said that, this is an indoor show so doing full-festival production isn’t possible. There are some very interesting ideas that we’ve thought about though – but you’re just going to have to see it first hand!

T.H.E – If tabloids are to be believed, India still remains an untapped market with respect to global exposure for Dance Music (We agree to disagree). Was this tour seen as a challenge to attract relatively modern dance music fans to newer experiences? (Much like the Resistance concept aims to accomplish)

Nikhil – It’s not just the tabloids saying it – I’m saying it and it’s the bare-naked truth. Here’s a fact that many aren’t aware of – The most number of tickets to all EDM events are being bought by the SAME people. We haven’t increased dance music’s fan base in India at a rate that I would be pleased with and that’s aptly a function of most events presenting similar music or artists. With Resistance, we hope to showcase an alternative side to EDM – deeper, more soulful and intense – while still being loads of fun and something that will leave your feet sore from all the dancing!

T.H.E – Submerge has been on the forefront of attracting the biggest names in the industry, covering multiple genres. What’s next for Submerge?

Nikhil – Mojitos I hope! The team at Submerge is always pushing themselves and the envelope of what’s perceived as great dance music in India. Our focus has always been the music and it will continue as we move forward as well. We all need to invest in and dedicate time to the most important aspect of our scene – the music. Playing it, listening to it, sharing it through conversations and blogs. We believe in curating nights and experiences where music is the hero. Loud and proud.
Lets not forget, that’s what got us here in the first place – music – not Facebook likes. That’s what I’d like to see more focus on before we all get lost in the cult of the Manufactured Superstar.

T.H.E – Thanks a ton Nikhil for this wonderful interview and T.H.E – Music Essentials team would love to wish you the very best in all your future endeavors. :)

Well if there’s one thing that this interview tells us, it is that Submerge definitely has big plans for dance music fans in India. All we have to do is wait and watch.