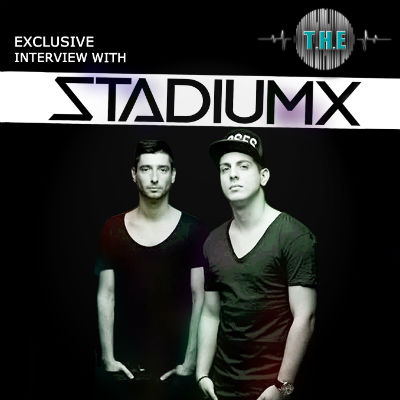 A new name, a fresh duo but certainly no newcomers to the international dance scene, check out our exclusive interview with Stadiumx!

Stadiumx is a DJ/producer duo, consisting of two Hungarian producers David and Sullivan (also known from Muzzaik with over a 100 releases on Beatport). This collaboration officially formed late 2012 and they have been working hard in the studio on new material. Stadiumx is formed to create and release their unique visions on music! Their goal? Bring a new energetic sound: a blend of house-electro and progressive which results in that “Big-Stadium” sound!” T.H.E – Music Encyclopedia got a chance to catch up with the makers of the Beatport chart topper, “Howl At The Moon”, Stadiumx. Check out our exclusive interview below where we talk about the dance music scene in Hungary, the making of “Howl At The Moon” and whether we can expect to see them in India soon!

T.H.E – How’s the dance music scene back home in Hungary like?

Stadiumx – Both dance music and electronic music has taken global sizes in the last few years worldwide. Hungary also wants to be a part of it! This means very good festivals like Balaton Sound and Sziget and very good producers coming into the scene with amazing productions!

T.H.E – How did “Howl At The Moon” happen? How pleased are you with the response to the track?

Stadiumx – We’ve been working in the studio together for many years now… When we’ve decided to work on Stadiumx project, we wanted to do something different than the sound now! ‘Howl At The Moon’ was one of our first productions we did and it’s a very good example of what we want to do in electronic music right now! We want to bring back the feeling, the melodies, the emotions to the sound but we want to keep the energy and vibe on the maximum level of the track at the same time! We’re more than extremely happy to see all the positive feedbacks we’ve got from the audience all over the world! We’re trying to work as hard as possible in the studio and sometimes we have to increase our limits and skills to a next level to improve new ideas into the sound! Sometimes we come to the point when we not sure it’s gonna work or not… so these positive feedbacks helps you a lot to trust in yourself and focus on keep developing your sound!

T.H.E – Which artists would you like to collaborate with in the future?

Stadiumx – There are some big names on our list! We’d love to work with those people who give us a lot of inspiration while we’re in the studio… Axwell, Dubvision, Nicky Romero!

T.H.E – Any other genre that you would like to dabble in besides progressive?

Stadiumx – House music has a very big spectrum with all the sub-genres! Let’s say progressive house is very close to our sound at the moment but we really don’t want to put ourself into a box and keep doing what we do just like that! As long as we can say it’s house music, we are up for it!

T.H.E – Which other artists do you’ll think are doing some great work right now?

Stadiumx – There are so many talented artists in the scene! It would be very hard to tell you all the artists we like, but Axwell is one of our all time favourite since we produce music! If you want to check for some fresh names in the scene, we’d say Sick Individuals and Galantis! They make some really good music!

T.H.E – What got you’ll into production? Do you’ll often disagree on things in the studio?

Stadiumx – Before we’ve started to do Stadiumx we’ve spent many years in the studio while working together on different tracks and projects! This was a very helpful period for both of us to develop our workflow and learn from each other! It’s still a pending process! We have new ideas and tricks everyday but we have to find the middle way of things that we approve from both sides!

T.H.E – One festival you’ll are looking forward to playing at?

Stadiumx – We’ll visit some really good festivals this summer! Summer and festivals are always a good combination with a lot of positive people and energy! It would make no sense just to pick up one!

T.H.E – How important do you’ll think it is to be in touch with fans over social media?

Stadiumx – Social media and getting in touch with your fans is just important as your music is today. There are so many names and happenings in this scene right now, so without finding the right way and communication to your fans you won’t be able to show your identity… People want to know you and what you do!

Stadiumx – We’ve done several new original productions and remixes in the past weeks and months! Some of them will be available very soon and probably you’ve already heard them in the radio shows or on our Soundcloud page! We did some collaboration projects with some very talented procurers and singers as well, but we will tell more about these things very soon!

T.H.E – An India tour on the cards anytime soon?

Stadiumx – As far as we know unfortunately we won’t be able to visit India this summer but we’d love to, so hopefully later this year we will be able to play there!