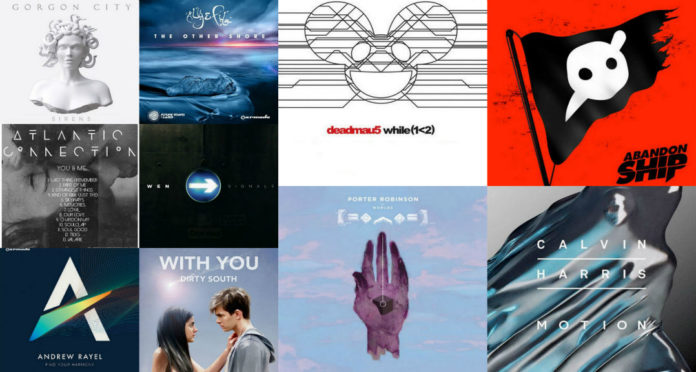 2014 saw more and more artists release studio albums. Some were good, some were very good, and some shouldn’t have been released in the first place. If you’re thinking about which album is worth your time and bandwidth, you’ve come to the right place. Read on to find out our Top 10 Albums of 2014 (In no particular order). Porter Robinson absolutely stunned everyone with this album, and the Worlds tour that followed. DJs have recently started showing the musicians in them by ditching EDM sounds and going for very different sounds. Worlds was a fantastic result of one such attempt. Sad Machine, Lionhearted and Sea of Voices were the standout tracks. Calvin Harris makes news for doing pretty much anything, so a brand new album from him came with a ton of expectations after a Grammy nomination for his previous effort. “Motion” was a lot different from “18 Months”, but equally good. ‘Summer’, ‘Blame’ and ‘Outside’ were classic Calvin Harris tracks, and ‘Slow Acid’ was a totally unexpected gem of a track from the Scottish DJ and producer. The Troll God got down to some serious business with this two disc album, which was full of sounds that only Deadmau5 is known for. A lot of tracks were continued from the 7 EP he had released earlier, which included the delightful ‘Gula’ and ‘Avaritia’. ‘Somewhere Up Here’ and ‘Phantoms Can’t Hang’ also stood out.

4. Dirty South- With You Dirty South came up with a unique musical idea – creating a story for the screen, and electronic music to go with the story. The story was heart wrenching, and the music was full of emotion. “With You” wasn’t so much of an album as it was an audio visual experience.

5. Aly and Fila- The Other Shore The FSOE pioneers were back with a new album, and it lived up to the huge hype surrounding it. The duo just keep on going, one huge tune at a time. The album was full of trademark Aly and Fila sounds, and tracks like ‘Nubia’ and ‘Running’ stood out. It also featured some very good collabs, and its probably because Aly and Fila bring out the best in other artists as well. The 21 old supertalent Andrew Rayel, who Armin van Buuren sees as the next big trance king, also gave us an album this year. Some of the best trance tracks of the year featured on this album, including the divine ‘Sacramentum’ and the equally good ‘How Do I Know’. His chart topping collaboration with Armin ‘Eiforya’ is also featured on the disc. Listening to this album is enough reason to become a massive Rayel fan. If 2013 belonged to Disclosure, 2014 was all about Gorgon City. “Ready For Your Love” was only the beginning, and “Sirens” was bursting with goodness. We simply couldn’t get enough of the brilliant tunes that ‘Here For You’ and ‘Unmissable’ were. Along with Disclosure and Oliver Heldens, this London based duo has made Deep House sexy again. Very few artists would come close to showcasing the same level of talent on a consistent basis like Knife Party. They can throw any sound at you and it’ll pretty much appeal to you. They managed to hold their own with their new album this year, despite it being leaked online weeks prior to its official release. ‘Boss Mode’, ‘Resistance’ and ‘EDM Trend Machine’ blew up speakers worldwide. And they’ve got more stuff coming out in 2015. Can we wait? Not really. To be fair to all genres of electronic music, it’s wrong to leave underground music out of this list, but it’s even better to have an underground album appear on this list simply based on the quality of the work. Wen’s Signals is such a class act that you’ll be stunned by the experience by the time you’re done listening. It’s an eye opening experience, discovering that the underground has such catchy sounds. Sounds like the ‘Intro (Family)’, the title track, ‘Signal’ and ‘Play Your Corner’ are brilliantly executed, and so addictive. “Signals” is the ultimate underground experience.

10. Atlantic Connection – You and Me Released as a free giveaway for Valentine’s Day, this 13 track effort from the very consistent Atlantic Connection took listeners on a journey with more feel than one could ever dream of. The sound was a little too smooth to be true, and the emotions were all there. To conclude this list, there was no other album of its kind to challenge “You and Me”. ‘Kind of Girl’, ‘Skyways’ and ‘Memories’ were simply outstanding.