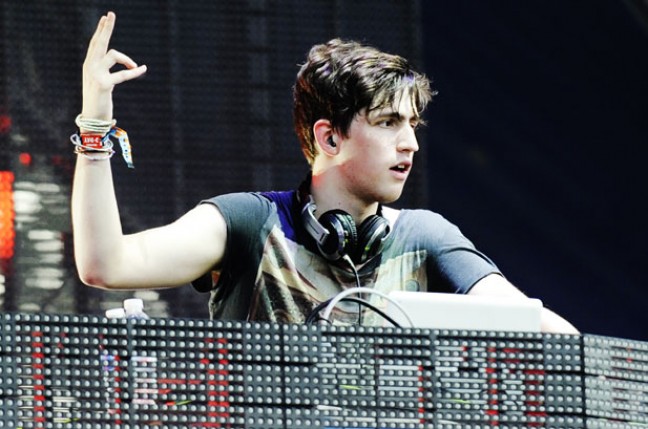 Meet our pick of the top 25 DJs/Producers who have had a real impact on the Electronic Dance Music scene across the globe in 2014! Anyone who has heard his album “Worlds”, or been to any of his Worlds Tour shows will tell you that he deserves to be in any Top 25 list for 2014. One of the biggest artists contributing to the changing EDM experience, be it through his productions or calling out moshers and ragers for not respecting his live show concept. Disclosure brought deep house back, and Heldens made sure everyone was hooked on to it. Simply stunning productions like “Koala” and “Gecko”, which became a sensation, and remixes like Can’t Stop made Oliver Heldens one of the artists of the year. He also collaborated with Sander van Doorn on a banging track called ‘This’. His quality productions also helped drew festival crowds back to deep house sets. Just when you thought progressive house was being eaten up by the more America friendly Dub and Trap, mashup king Justin Blau arrived on the production scene. Thrilling us all with his productions like “Escape” and “How You Love Me”, he even got a release on Tiesto’s label, for his track “Bang”, along with a slot on Dash Berlin’s album for their collaboration ‘Somehow’. Within a very short span, 3Lau has firmly cemented his place as one of the most consistent progressive house producers. The Anjunabeats bosses had a stellar year, beginning with their much talked about Acoustic album, which was a total gamechanger, although everyone had predicted that they’d release such an album someday, after live band performances, once even with Skrillex at one of their shows. To follow it up, A&B outdid themselves with their ABGT 100 show in London, which became a worldwide trending topic. The 23 year old from Norway was chosen to replace Avicii on the mainstage at TomorrowWorld, and enchanted the crowd in Atlanta with his infectious brand of Tropical House. Better known for his remixes, his “Younger” remix catapulted him to worldwide fame this year. He also recently previewed a collaboration with Moombathon big boy Dillon Francis. If anyone can lead the Tropical House revolution it’s this talented young producer. Mr.’Excuse My French’ DJ Snake also makes his way to our Top 25 list and it isn’t too difficult to figure out why. His track ‘Turn Down For What’ hit 9 million downloads worldwide, and his Dillon Francis collaboration, “Get Low” was featured in the Fast and Furious 7 soundtrack. His track, “Lunatic” blew up speakers at all the major festivals as well. All this without taking off his sunglasses. Our T.H.E Artist Of The Month for February 2014, Daan “Dannic” Romers had a mind blowing year as well. Starting with the intense production “Lion”, Dannic was at his peak throughout the year. A brilliant festival edit of DallasK’s “Superfuture” was also delivered by Dannic, as was one of the best collaborations of the year – “Radical” with Dyro. He also gave us another solid track – “Solid” with TV Noise. All this and a brand new podcast ‘Front of House Radio’ ensured a busy year for him. Before this year, they were better known as the guys behind the “Committed To Sparkle Motion” remix. But some very well produced tracks only enhanced their reputation this year, as one of the better soulful progressive house producers. Their collaboration with Firebeatz, “Rockin” was a perfect blend of melody and a high energy drop for the festival crowds. Their latest track ‘Broken’ turned out to be a stunning production, and is sure to rock festivals in 2015. The World No.1 from Breda managed to hold on to the coveted spot, and together with some brilliant signature festival sets and a successful year for his imprint, Revealed Recordings, emerged as one of the most impactful artists of the year. Music wise he was on top form too, with a collaboration on mentor Tiesto’s album, as well as the 100th release on his label, ‘Everybody In The Place’. He recently also announced an album scheduled to release on January 23rd, 2015. There’s a big chance he’ll manage to hold on to the No.1 spot once again. If there’s one track every single DJ played at least 50 times this year, it’s “Payback”. So it’s only natural that one of the big collaborators behind the track, and the head of one of the fastest growing music labels in the industry, Size Records makes it to this list. While many had predicted that Angello wouldn’t be able to garner success post the SHM breakup, he has done just the opposite. He also had another massive release this year – “Wasted Love”. Gareth Emery, the man behind the Garuda label, also had a wonderful year. Be it tours, or his album which was released this April, Gareth managed to hold his own this year. The former trance artist changed his image completely with his album “Drive”, ditching the “Concrete Angel” sounds to go in for something more in sync with today’s crowd, and did remarkably well. Tracks like “U” and “Lights & Thunder” with Krewella were runaway hits. He launched his own label this year, showed up as Wolverine at Tomorrowland, announced his own tour with Bassjackers to promote their upcoming track “X”, and successfully completed another year for his podcast Daftastic Radio – Dyro completely deserves to be on this list. The head of Wolv recordings also had some wonderful releases such as “Radical” with Dannic, “Black Smoke”, “Sounds Like”, and “Against All Odds”. Oliver Heldens wasn’t the only one responsible for the return of sexy deep house, Gorgon City also played a huge role. Their album already made its way to our Top 10 Albums of the Year, simply because it had so much quality, that you’d become a fan instantly. Along with their album they had a track which made them overnight superstars, which was played on podcasts by big artists who rarely played deep house – “Ready For Your Love”. Along with 3Lau and Dubvision, one name particularly made its way to the best of progressive house this year – Paris Blohm. More than his music, it was the inspiring story of how a boy who delivered food for a living gave up his job to follow his dream and shot up to No.1 on Beatport Top 10. The American producer delivered stunning tracks like “Left Behinds”, along with a few more remixes, and of course the hugely successful “Colors” on Protocol Recordings. There’s one name synonymous with quality Melbourne Bounce, and its almost certain that any track by this artist will get you grooving. TJR and Laidback Luke helped Bounce go commercial, but Will Sparks and his unique brand of unadulterated Melbourne Bounce emerged the winner in 2014. After “Ah Yeah” and the “Dynamo” remix last year,he gave us tracks like “This Is What The Bounce Is” this year, and his EP was also hugely successful. This duo delivered arguably one of the best tracks of the year in ‘You’, remixed by almost everyone and definitely played at every major and minor festival in the world, and their stunning EP featured tracks like “Smile” and “Runaway”, which were also massive hits. The project, formed by Style of Eye and one third of Miike Snow, and has certainly raised the bar when it comes to quality of production.

When artists of Skrillex and Diplo’s stature come together for a project, the hopes are raised almost instantly. And with Jack Ü, they didn’t disappoint. They’re both known for some smashing live shows, and they lived up to the hype with their live sets, including one at Ultra Miami. Music wise they were at it again, garnering acclaim for their first track “Take Ü There”. The kings of yearmixes also make it to our list, out doing their 2013 mix with another stellar effort in 2014. They were also consistent with their studio work, including an original release for “Highline”‘ in January, and a remix collaboration with Tiësto for John Martin’s “Anywhere For You”. They also remixed some popular Pegboard Nerds tracks, including “Bassline Kickin”. They also put out a quality remix for the worldwide Imagine Dragons chart-topper, “Demons”. When your remix is the fastest selling track on an Armin remixes album, you’ve got to be talented. Standerwick released his breakthrough track just last year, and this year he was seen playing at Armin’s ASOT 650 show. He also had 4 tracks in this years Trance Top 100, including a collaboration with Aly and Fila. More than enough reasons for the rising superstar to make his way into our Top 25. Dmitry Chumak aka Photographer has been making headlines for his productions and remixes, and has really made 2014 a year to remember for himself. Along with a number of releases on Who’s Afraid of 138, he was also one of the artists responsible for the Goodgreef Future Trance Mix Compilation. Earlier known as No_ID, the duo spent a large part of the previous year locked in a legal battle over their artist name. However, they bounced back in 2014 and how! A number of releases on Axtone, with whom they’ve been associated for the longest time now, along with some stellar remix work saw them rise as one of the artists of the year. “Tear It Down” and “Feel The Pressure” were one of their better works of the year. Arston produced a number of quality tracks and had them released on the most prestigious labels, making him a natural choice for this list. “The Universe” with Marcus Schossow, and “Symphony” with Sandro Silva, both released on Revealed were some of the best tracks of the year. His remix of 3Lau’s “How You Love Me” is also widely considered to be better than the original. The 26-year old Egyptian also makes it to our list for this year’s Top 25. “Lost Again” on countrymen Aly and Fila’s FSOE label was definitely one of the best tracks of the last 12 months, and his Armada release “Remember Me” was notable as well. His remix of “Higher” and “Silent For So Long” also made it a year to remember for him. While Calvin Harris was making his way to Armani hoardings, fellow Scottish DJ Will Atkinson was busy shelling out quality productions from his studio. Atkinson’s Sunset in Ibiza remix was widely recognized, as were his original tracks like “Isolator”, “Victims” and “Sharpshooter”. The duo from North Holland announced themselves last year with breakthrough hit Tremble, and this year have only enhanced their reputation.White Lies was definitely one of the better tracks of the year, and their collaboration with label boss Nicky Romero titled Let Me Feel was also a very very sound production.