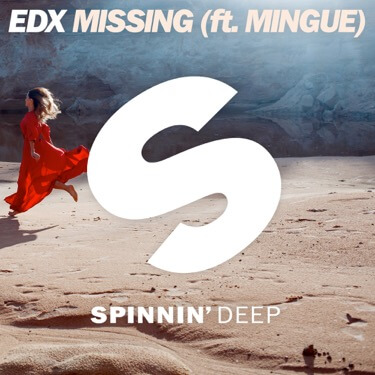 After a tremendous 2015 that was punctuated with being named the #1 charting Beatport artist of the year over international heavyweights like Tiesto and Maceo Plex, EDX is kicking off 2016 on a high note with his first original of the year, ‘Missing’ featuring Mingue, available now on Beatport through Spinnin’ Deep.

On ‘Missing’, EDX tabs the up-and-coming songstress Mingue for a modern-day performance of Everything But The Girl’s record of the same name, while infusing the track with his signature deep house sound. The track opens with a curtain of shimmering piano melodies that is peeled back to reveal a chunky beat, catchy hook and soft, thudding bass stabs that give ‘Missing’ a deep groove.

The Swiss-born producer / DJ was responsible for some of the biggest tracks of the year in 2015, including his original, ‘Belong’, his ‘Indian Summer’ remix of Sam Feldt’s ‘Show Me Love’, which went on to become EDX’s most played track on SoundCloud with over 60 million streams, and his ‘Ibiza Sunrise’ remix of Robin Schulz’s ‘Sugar’,that went on to receive gold and platinum certifications in various countries. With ‘Missing’, EDX is looking to add to his impressive string of Beatport-dominating releases, making 2016 another year he’s bound to be dominating dance floors everywhere.