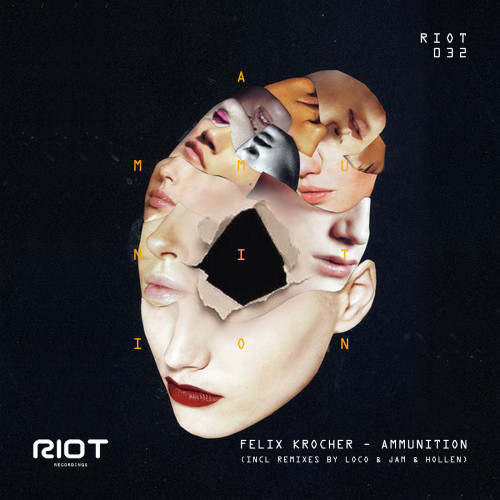 German techno don Felix Kröcher starts the year off in style as he returns for his second EP on Italian-based techno label Riot Recordings.

‘Ammunition’ EP is a full-blown techno outing from the German maestro, demonstrating his intricate grasp of the genre and his ability to consistently create dance floor ready productions. Two heavy and spacious remixes from Hollen and Loco & Jam complete the EP, which is available to purchase now via all digital retailers.

The A-side ‘Ammunition’ is a network of punchy bass, syncopated hi-hats and a strong 4/4 kick. Felix subtly adds to the palpable intensity as he filters the refined and dynamic combination of kick, hi-hat and bassline to accompany the track’s synth rises. Complementing ‘Ammunition’ is the B-side – ‘Amps’, which proves a more minimal affair. Felix uses space in the track to create a broad and deep sound that is as punchy as it is clinical. The driving kick is interjected by staccato synth-work, drawing the focus of the track to the methodical rides and periodic percussive elements. Creating an otherworldly atmosphere, the German producer has once again proved his undeniable production talent.

Remixing ‘Ammunition’ on the EP is Northern Irish based techno duo Loco & Jam who have supplied a tech-house take on the original, with affected vocals placed above the bassline and an additional wiry sub-bass synth. For ‘Amps’, Felix has brought in Italian producer Hollen to give his bass focused version of the track, sure to create a stir on the dance floor. With two fantastic additions to the already stellar originals, Felix’s ‘Ammunition’ EP is not one to miss.

With a longstanding weekly radio show on Sunshine Live in Germany, outstanding productions and performances at some of the largest and well-known venues and festivals around the world, it’s easy to see why Felix Kröcher has been deemed a true icon of German techno. A testament to this is his ever increasing fan base and packed touring and release calendars. With his ‘Ammunition’ EP now under his belt, 2016 is shaping up to be a big year for Felix.