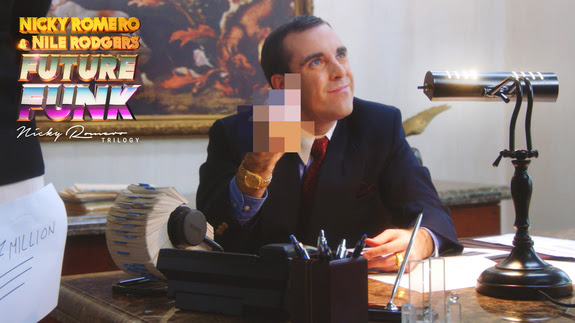 Dutch dynamo Nicky Romero ensures a sensational start to the year as he unveils his captivating collaboration with music icon Nile Rodgers on the phenomenal ‘Future Funk’ – out now via his very own Protocol Recordings imprint.

A record that first took shape whilst the pair were hanging out in a studio session together with David Guetta in LA, as Nile was busy exercising his recently repaired guitar, his experimental riff caught Nicky’s ear who, instantly recognizing its potential, immediately recorded it into his laptop for future use. Adding the instantly infectious guitar licks to a beat and layering them with an irresistibly catchy melody and striking vocals, ‘Future Funk’ is an effortless fusion of Nile’s inimitable disco rhythms and Nicky’s ever evolving sound. It’s a testament to both Nile’s extraordinary talent and Nicky’s exceptional instinct that something which started life as a rudimentary riff has been lifted and honed into a superb piece of dance meets pop perfection.

Last year, Dutch dynamo Nicky Romero signaled a new creative direction as he unveiled the first part of the self-titled Nicky Romero Trilogy – a pioneering and imaginative audiovisual journey unlike anything the prolific producer had done before. With Part One still eliciting intrigue amongst fans into its melancholic yet hopeful meaning, Romero has opted to release the second video installment to coincide with the release of its musical counterpart. Going further back in time in Jon’s life, Part Two is a parody of the dark underside of the 80s wall street scene, with a cast of frivolous financiers playing around in a world of sex, drugs and rock and roll. Set a decade later in the 90s, the short film perfectly encapsulates the spirit of the frantic fast-paced world it is relaying. Frequent flashes of business deals, debaucherous acts and boardroom rivalries with the occasional ‘Lighthouse’ snapshot the only reminder of a life beyond, the scenes are seemingly spurred on by the song’s punchy synths and racing riff. Offering viewers a glimpse into this warped world, the story focuses on the protagonist’s rapid decline as his seemingly high-flying life goes worryingly awry culminating in an unwelcome but not altogether unexpected visit from the FBI…

2016 is set to be a career defining moment for Nicky Romero. The global megastar has just got back from an incredible trip to South Africa where he joined forces with Olmeca Tequila to fly 100 fans from all over the world for a once-in-a-lifetime opportunity to party with Nicky and the entire Protocol family. With more creative and out of the box campaigns ready to roll out in the coming months and ‘Future Funk’ just a glimpse of what’s in store on the production front, expect nothing short of epic as 2016 continues to unwind.