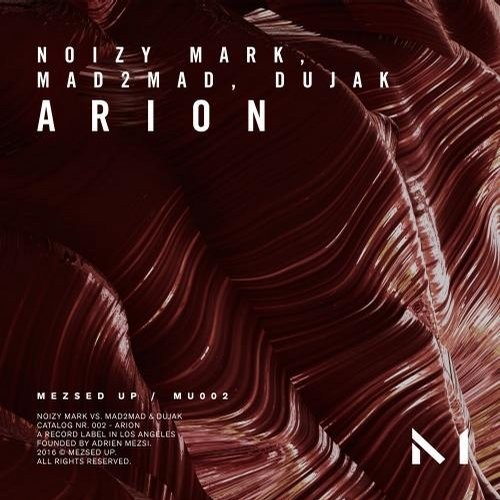 Mezsed Up Records are back with their second release, coming in the form of a stunning collaboration between Noizy Mark, MAD2MAD and Dujak, named Arion.

Off the back of releasing his debut single Vesper on Feenixpawls Eclypse Records, which gained huge support from Dannic, Noizy Mark has joined forces with emerging duo MAD2MAD and Serbian producer Dujak to create Arion, a track that is sure to climb rapidly up the Beatport charts. The Italian based DJ and producer is one of the scenes finest craftsmen, with past releases on Void Records, and tastemakers such as: Afrojack, John Dahlback, Deniz Koyu and Juicy M championing his work.

Teaming up with Noizy Mark are high flying duo MAD2MAD, who have been rapidly climbing their way up the EDM ladder since they started producing and DJing in 2009. Releasing on well-respected labels such as: Void Records and Chillbeat Records, their productions havent been going unnoticed, by A-listers such as: Dimitri Vegas & Like Mike, Marcus Schossow, Kryder, Tom Staar and Juicy M throwing their weight behind the Serbian pair.

Their compatriot Dujaks quest to joining the industrys elite is firmly on course. His unique and fresh sound has led to releases on Chillbeat Records, tasking him with officially remixing French star Rob Adans, as well as gaining radio support from industry leaders like: Nari & Milani, Arno Cost, Delayers and Joachim Garraud.

After fitting some studio time into their hectic schedules, the result was majestic. The peak time Electro infused Progressive thriller Arion was born and has been making huge noises at this years Miami Music Week and landing support from Dimitri Vangelis & Wyman thanks to its regimental drums, a heavy, yet groovy bass-line and euphoric chords  making it a must for every DJs record box.

Arion is the second release on Adrien Mezsis newly established imprint Mezsed Up. The release sees Noizy Mark, MAD2MAD and Dujak join names such as: Rayven & Valexx, Xaver and label boss Adrien Mezsi on the labels impressive roster. You can now grab your copy of Arion before it flies off the shelves.