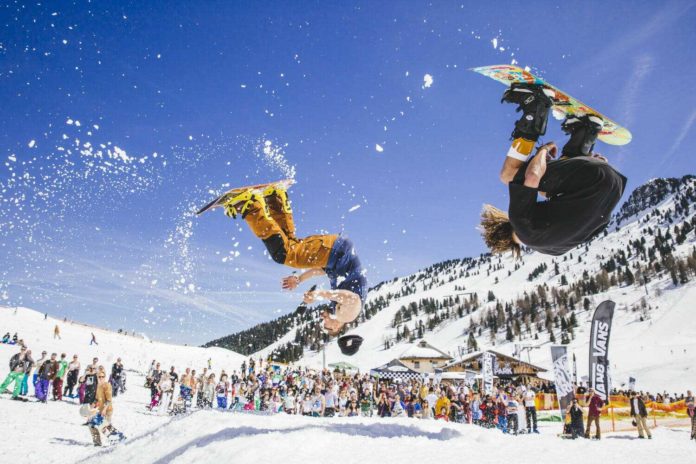 Taking place from 3-8 April 2017 in ‘the party capital of the Alps’, the festival’s 18th edition will feature acts including Run The Jewels, Chase & Status and many, many more.

But it’s not just the music that keeps Snowbombers returning to this mountain paradise each year… With igloo raves 6000 ft above sea level, mountain top stages, enchanted forest parties, 650 km of unadulterated piste, an award-winning Snow Park and much more, Snowbombing has redefined winter sports holidays and shown what the ultimate alpine music festival looks and sounds like. Here’s 12 reasons Snowbombing is the ultimate music festival on snow.

1. Journey to the Alps with a travelling freak-show on the Snowbombing Road Trip! 2. Rave in an igloo at the Smirnoff Arctic Disco

Ever danced inside an igloo with the stars as your canvas and the world’s greatest DJs as your soundtrack? Choose from acts including Gorgon City, Disciples, Redlight, DJ Yoda and Super Hans at the Arctic Disco and get those snow boots thumping!

3. ‘Strike a pose’ with mountain-top Voga Unwind and stretch out with a unique, music-led fusion of yoga and voguing (the kind Madonna brought us) with House of Voga. Be prepared to bend, flex and throw some shapes to a fun and energising 80s beat with stunning views across the Alps.

4. Experience the magic of Elrow at The Bronx Street Party 5. Relax and unwind in luxurious spas and rooftop hot tubs! Snowbombing’s home town Mayrhofen excels in wellness as much as in winter sports. Unwind in bubbling rooftop hot tubs with panoramic mountain views, relax in luxurious spas, take a Thalasso, hog a Hammam or melt into a massage before the big night ahead… come midnight and you’ll be positively glowing beneath that glitterball!

6. Party in the world’s most unique party venues 9. Show off your moves at The Dance Off Let loose and throw some serious shapes at The Dance Off! Step into the boxing ring but leave your gloves behind and prepare to do battle with your best moves instead. Anything and everything goes in the battle to be crowned the best dancer at Snowbombing 2017. Don your finest lederhosen for Snowbombing’s traditional Austrian party with a twist’! ‘The Leder-Hoedown’ will take over the main high street with pop up stages, food from local hero Hans The Butcher and music supplied by traditional oompah band Zell Brass and Snowbombing resident DJs. 12. Find love in the mountains!

Forget online dating, the mountain top is the ultimate matchmaking platform! Let the Snowbombing cupids set you up on the most romantic, high octane speed date of your life for a spot of chairlift speed dating.

For a taste of the action, watch this video.