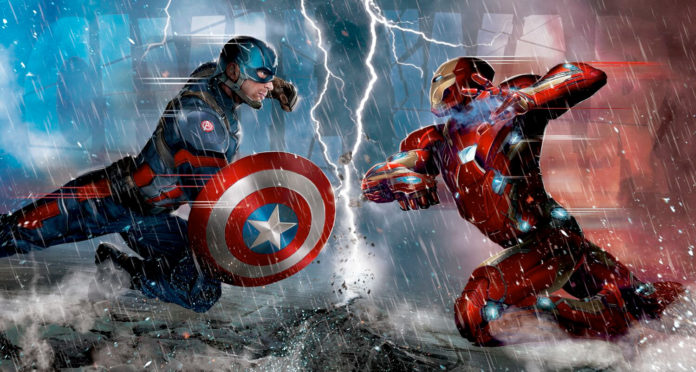 In lieu of last month’s record breaking Marvel movie, Captain America: Civil War, we at T.H.E got in touch with a few artists we know are huge Marvel fans to ask them the all eternal question: #TeamCap or #TeamIronMan?

We definitely choose Iron Man. His superpowers come from his brain, and the way he invents all of his various gadgets and weapons. He’s constantly tweaking his inventions, like he has version 6.0 of things. That’s kind of how everyone in the creative and tech space work in the real world too which is cool. It’s not perfect the first time, but if you work at it, it can become amazing. His power really resides in his intelligence and perseverance and those qualities are something we really admire in people. Captain America is just kind of an average joe who became a super soldier because of a weird experiment- there’s really nothing that special about him beyond that. Go Iron Man.

Look, if we ha​d​ to pick one off the cuff, then Iron Man. A thousand times Iron Man. The guy is straight up badass with a trail of smart quips a mile long. What are we idiots? Ol’ Cap’ is mighty tired. And never stops with the moody whining. Then we read the basic synopsis​ of the plot​, and Iron Man is on the side of the government regulating these comic deities? We were both stunned. Three simple words came to mind: Fuck. The. Police. No one tells us what to do. Especially the government, it makes us instantly bristle with contempt. So who would we say we were going with? As far as our friends and family are concerned, we will say Iron Man to avoid being pelted with rotten cabbage… but then in secret we would have to reluctantly stand in Cappy’s corner if the shit really went down. But first we would have to hold him down and shave off his middle-schooler-in-the-90s hair. You know it’s true. Nuff said.

Team Ironman! You can’t save the world with just a pair of fists and a shield. We need a 21st century superhero! We need someone who uses technology to his advantage, and who knows that sometimes you have to break the rules to take down the bad guy. You can keep Captain America, with his World War II technology and his hall monitor sense of right and wrong. I’ll take the guy that can fly (and shoot missiles out of arm at the same time).

If I had to pick a side I’d definitely go for Iron Man. His suit is badass, he’s a technological genius, and could you imagine the music studio you’d have access to if you were on his side? The dude would probably be a legend music producer himself if he wasn’t too busy slaying crime.

Team Iron Man for sure, he’s a badass super hero!

I think I’d choose Captain America, just for his awesome shield. Iron Man is such a boss too, but Captain’s shield just kicks ass! He’s a great leader and that’s most of the time the key to a winning team in my opinion. He also has his sick physical powers and of course… his shield haha! Captain America also makes a way better fighter because he can hide himself so much better. He also is able to run way more easily and he does have a lot of muscles, so 9/10 times: he will win a fight. Iron Man is more likely to lose against Captain America because although he has an insane suit, if the suit crashes, he is basically fucked. So he’s very vulnerable and that’s what makes him weaker than Captain imo. But both are really awesome characters!

Well, these artists have had their say… 4 for #TeamIronMan and 2 for #TeamCap. What about you? Whose side are you on?