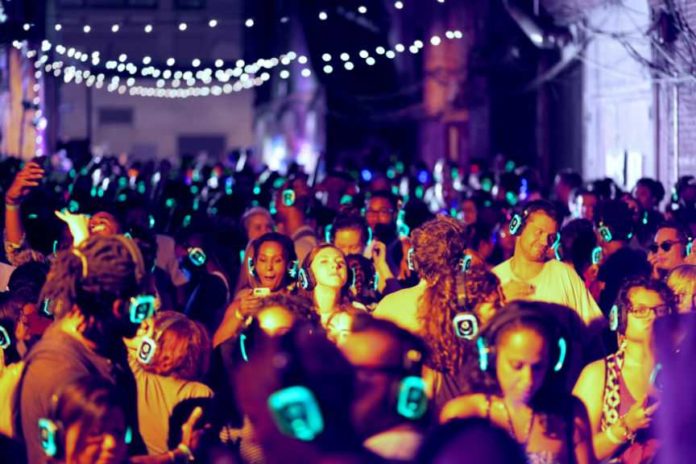 One or more disc jockeys man laptops and transmitters. Crowds dance, sometimes exhibiting different styles. Witnesses to the dance floor hear no music. Rooftops, fields and enclosed clubs serve as some of the venues. To those without prior knowledge, a readily logical explanation is illusive. Welcome to the World of silent discos. Don’t worry, the party goers dance to actual music. Thanks to wireless signals from the disc jockeys, the tunes are audible only to those wearing the headphones that receive them, thanks to the work of companies like Headphone Disco.

Conceived by ecology-minded people in the 1990s, quiet discos were offered as an answer to noise pollution. Health problems such as high blood pressure, hearing loss, disturbance of speech and sleep, and stress have ties to noise pollution. In 2005, the Bonnaroo Music Festival in Tennessee afforded a platform for quiet discos to gain a broader appeal.

Quiet discos and the technology that makes this trend possible have gained popularity for their impacts on party crowd satisfaction, mitigating noise nuisances and law violations, and uses even beyond the disco scene. In the traditional disco or dance party, the disc jockey alone decides what gets played without much need to consider the participants’ tastes. Requests for particular tunes may go unaccepted. Listeners might become obscure to the disc jockeys.

The three channels contained in the headphones empower the crowd. Participants can choose among multiple genres such as Top 40, hip-hop, 1980s’ hits, or even modern country. When a jockey’s selection lacks appeal, the listener can switch to another channel. The disc jockey reads the popularity of his or her music by the number of headphones registering the color of that jockey’s channel.

Along with competition among disc jockeys, comes the crowd’s ability to hear and talk. Conversations need to devolve into shouting contests to allow hearers to overcome loud speakers. Organizers of silent discos tout the avoidance of legal issues that normally attend large parties with music. Specifically, the absence of amplified speakers makes compliance with noise ordinances more likely. Depending on the jurisdiction, the noise ordinance makes sound that registers above a particular decibel level unlawful. These thresholds are often lower in the evening time.

Aside from noise ordinances, property owners face potential liability if their noise creates a nuisance. In most jurisdictions, a nuisance consists of a condition on property, such as excessive noise, that diminishes another owner’s use and enjoyment of property. Creators of nuisances face civil judgments or orders to cease the activity or employ noise mitigation.

Silent disco technology can reduce or eliminate the need for nightclubs to employ noise mitigation measures in order to comply with noise-related laws. Without headphones, music or party establishments usually must rely on materials such as “Acoustiblok” wall covers and floors, sealants, foam floors, sound mats as sound barriers or absorbers. Signal processors normally would reduce the peak output level of amplified sound.

With disc jockey noise not being a basis for legal action, music lovers and party-goers may congregate in non-traditional disco settings. These may include open fields, lake or ocean-side areas and other places away from urban settings. However, not all locales view silent discos as the cure to noise problems. In 2016, the Swiss municipality of Lausanne prohibited an outdoor “silent disco” planned for the summer months. As a ground for the ban, a business regulation department deemed the crowd noise to be not appreciably different from the music typically played in a disco. Singing, talking and other noises from large crowds could generate considerable noise, perhaps enough to engender complaints or violations themselves. The “silent disco” concept has cultivated a new breed of music festivals and fundraisers. Organizers of renowned festivals designate stages and other areas for silent or quiet discos. As such, live bands and their equipment do not duel with disc jockeys offering dance music.

With the multiple stages come the possibilities of fans of different types of music at a single festival. Genres often have their target or unique demographics. Diverse offerings of music bring together those of multiple races, genders, age groups and musical tastes.

Music or other audio to headphones can also transform experiences beyond the disco scene. For example, art lovers use tunes to accompany their appreciation of sculptures, pottery, painting and other works of art. Self-selected narrations and “experiences” guide visitors on tours of parks and museums through the technology that springs forth quiet discos. Multi-channel features raise the specter of multilingual events and presentations.

Have you been to a silent disco? Don’t forget to share your experience with us!