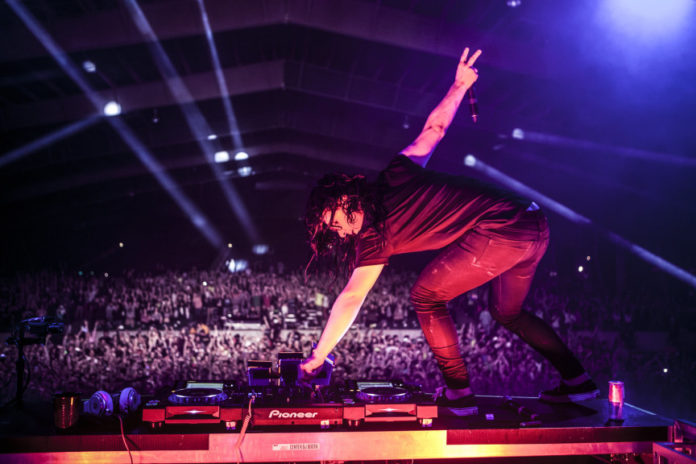 A name synonymous to the bass music scene. The man who made “Dubstep” a household name. The one who popularized the asymmetrical hair cut. The man who inspires millions with his colossal sets. The talented DJ/Producer who was once the lead singer in the screamo, post hardcore band – From First To Last, will be touring India in a few days time! Skrillex! In celebration of his much awaited India tour, we shall be doing a 4 part Skrillex special for all you lovely people! :)

Kicking off our special we take you on a journey of the “Evolution of Skrillex”, showcasing the defining moments of this super star talent’s career. Let’s begin! 2010 was the year Sonny Moore made his debut as Skrillex, releasing his first EP entitled “My Name Is Skrillex”, for free on Myspace on June 7th. The EP soon became viral, exposing the world to his fresh and unique sound. During the same year, as news of the ex-rocker’s new solo sound spread all over the world, Skrillex managed to catch the attention of a certain mau5, yes it was Deadmau5, who subsequently signed him to his Mau5trap label releasing “Scary Monsters and Nice Sprites” which threw young Sonny into mainstream success, dominating charts all over the world. At the same time spawning a number of copycats whilst bringing the world’s attention to dubstep, well brostep, ah whatever you want to call it. During 2011, things rapidly picked up for Skrillex. He seamlessly brought together Dubstep and Nu Metal. Skrillex among other producers such as Excision, Noisia, Downlink, Feed Me, Kill The Noise and 12th Planet, produced Korn’s “The Path Of Totality” album.

Skrillex’s production in particular, “Get Up” peaked at no. 10 on the Mainstream Rock charts. On June 2nd 2011 Skrillex released the remix EP More Monsters and Sprites. It soon became Skrillex’s second record to reach the top 10 Dance/Electronic charts which peaked at no. 5. In the same year he unveiled his own label imprint called OWSLA, expanding his reach into the business side of music whilst nurturing new talent. As if 2011 wasn’t already jam packed with achievements for Skrillex, he later released the Bangarang EP which once again managed to top the Dance/Electronic charts, also peaking at no. 14 on the Billboard Top 200. Proving once again why he’s one of the best electronic artists in the world. A musical artist knows he/she has really made it big in their career when they win the prestigious Grammy award. Skrillex didn’t manage to win just one, but 3! At the 54th Grammy Awards in 2012, Skrillex took home 3 trophies out of 5 nominations. He won Best Record for Benny Benassi’s “Cinema”; Best Dance/Electronica album for Scary Monsters and Nice Sprites EP and Best Dance Recording for the title track of the same EP. Another year and another 3 trophies taken by Skrillex at the 55th Grammy Awards. As if the 3 he won in 2012 wasn’t enough, Skrillex follows suite in 2013. He won Best Dance/Electronica Album for Bangarang; Best Remixed Recording, Non-Classical for Nero’s “Promises” and Best Dance Recording for Bangarang Featuring Sirah. After much time, Skrillex finally releases his debut album entitled “Recess” on March 17th 2014. Featuring collabs with Diplo, Kill The Noise, Fatman Scoop and Ragga Twins, it peaked on the Billboard 200 at no. 4. Moving onto movies, Skrillex decided to document his Mothership 2014 tour. The “Let’s Make a Spaceship” documentary Film was produced by Red Bull and premiered at the Austin City Limits Festival on October 11th. It showcases Skrillex and co creating the Star Wars themed focal point piece for his Mothership tour in 2014 as well as showing Sonny as a guy. With so much more to offer and a fast paced, ruthless path to the top, Sonny “Skrillex” Moore shows no signs of slowing down. Ever evolving, ever creating, ever inspiring, ever moving, the Evolution of Skrillex is far from over. “Survival of the fittest” in the ever-changing, taxing music industry, adaptation is the key and as we can see Skrillex has done just that. But more importantly he has engraved his mark in the world of dance music that can’t be simply chipped away.