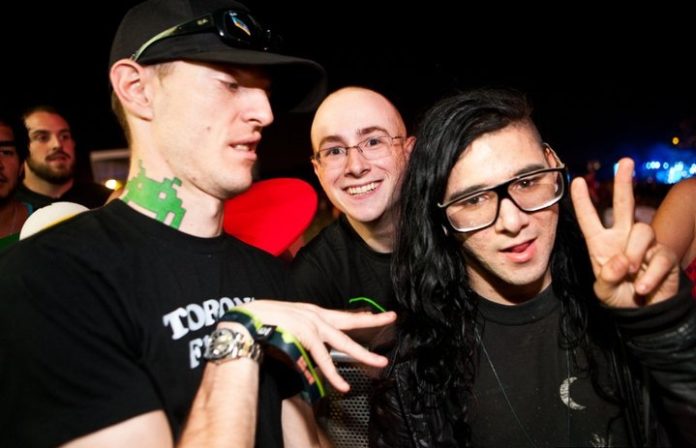 We have reached the end of our Skrillex Special. For the finale we have put together some interesting controversies that Skrillex has been involved in.

The music scene is highly competitive, the stakes are high. As such, every dj has encountered some sort of controversial issue or misunderstanding. The cost of fame hey. Skrillex being a mega star in the music scene has seen his fair share, so let’s go through three of the most popular Skrillex Controversies.

The first controversy or more accurately described as a mere misunderstanding involves rock legend Dave Grohl of the Foo Fighters and Skrillex. Back in 2012 at the Grammys, Grohl’s acceptance speech was interpreted as him saying that music made with actual instruments as opposed to music made fully electronically was superior. This gave rise to many disgruntled fans. In his speech he said:

Grohl later released a statement to clarify what he meant in his speech. All in all it was one of the most ridiculous misunderstandings which of course Skrillex had no reaction to. Everything was cleared up, all is well.

Zomboy claimed that the similarities were simply coincidences. He posted a message on Facebook explaining the situation:

“I wrote Terror Squad completely unknowing of Skril’s song, or so I thought… last year I was at Sonny’s place in L.A with a few other people and while he was playing us previews of his album ideas, I fear i may have
subconsciously held onto the vibe of ‘DJ Tool’ which may be why I had the idea in my head, but hand on heart, it was not aimed to be a rip. If you listen to the original leak there are only loose similarities to terror squad, but the new version fully mimics my drop which is hilarious, flattering, and a little bit embarrassing all at the same time, but hey as the man says – ‘All is Fair’
There is no beef between Sonny and I and as you probably know he is literally the sole reason I started writing electronic music…. even the fact that he bothered to do what he has done with his new song is an honour in itself. The important words at play here are ‘FAIR’ and ’LOVE. If you don’t believe me then you can hear it straight from Sonny himself…”.

The issue was soon sorted out, Skrillex and Zomboy both confirming that there was no beef between them. Many would argue though that the similarities of Zomboy’s music to Skrillex’s music is uncanny.

Onto a recent controversial situation with Skrillex and none other than troll king mega star DJ/Producer Deadmau5. This past August during an interview, Skrillex called Deadmau5 an a**hole. Skrillex said as follows:

“I’ll always have love for Joel, because he’s put me on at an early time (in his career). But he’s an asshole. And everyone knows that, he knows that. I think that’s kinda his thing. The one thing that is unfortunate about it is he has a record label and when you have a record label you’ve got to be a leader and he has people that are signed to him. I couldn’t imagine being a leader, going out [with] a public image being such a negative attitude.”

This was due to a tweet Deadmau5 posted about Jack U’s song with Justin Bieber – “Where Are U Now” saying:

“made the mistake of listening to this jack u shit with bieber assuming they at least did something cool… nope. what the fuck is this shit?”.

he should have brought that up when i released his first album for him. whatever. you like what you like. https://t.co/nzNeiCP0Lu

thanks for that pocket full of certified psychoanalysis. its really unfortunate i have a label. sorry for being me. https://t.co/AMOmG9ow6m

at the end of the fucking day, if im "miserable / moody / negative" then thats just me dealing with or not dealing internal shit.

yes. im aware that i can be a fucking diva. yes i am aware than i have more than one complex. very fucking aware.

the people you should REALLY fucking worry about, are the people who dont know it.

so YES @skrillex im SUPER SAD im not as cheerful, and super inspired by life like you. and im so SORRY im an asshole. but how about…

you let me worry about that shit.

some peopl, don't want to be helped. im scraping by life with my fuckin insecurities and successes just fiiiine. https://t.co/lrXr1Kmx0v

now, give it a fucking rest and talk about cats or some shit so i can go build a PC.

The Connection Between Music And Gambling