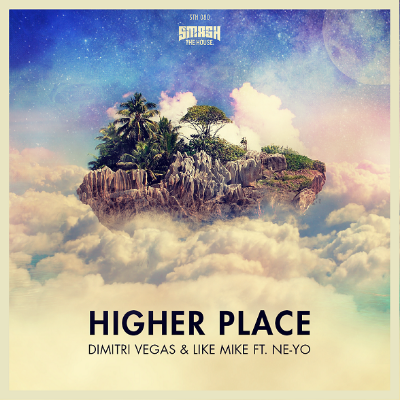 Just days after unveiling their new collaboration with US hip-hop star Ne-Yo, it’s evident that Dimitri Vegas & Like Mike have something of a major hit on their hands with ‘Higher Place’.

Even prior to his official release (July 20th) the track has been so eagerly coveted by fans that it recently made Shazam’s Top 100 most popular tracks chart. Now, the follow up record to their recent smash ‘The Hum’ just got even more exciting, with a remix by Dutch duo Bassjackers available for free to anyone who Shazam’s the original.

Premiered at this year EDC Las Vegas, with the Grammy-award winning Ne-Yo joining the duo live on-stage, ‘Higher Place’ has quickly become a fan-favourite thanks to its ability to cross genres and appeal to a wide range of fans. With Bassjackers injecting a fresh dose of energy into Ne-Yo’s R&B top-lines and Dimitri Vegas & Like Mike’s earth-shattering production skills, ‘Higher Place’ looks even more set to become one of the biggest hits of the year.

With a busy summer of live events ahead of them, including headline shows at Tomorrowland -on both the festivals iconic main stage and their own Smash The House arena – and their continued shows at Amnesia Ibiza with their House of Madness events – where they have also just been nominated in the island’s 2015 DJ Awards in both the Electro/Progressive House and International DJ categories – the Belgian brothers look well on their own way to a ‘Higher Place’ amongst their fellow electronic peers.