Dave Winnel is conquering the world, performing and playing globally at big festivals like Tomorrowland and Stereosonic.

Chasing the Sun, Dave takes Amsterdam as his residence for one half of the year and Sydney for the other half. Known as the funny guy, his infectious personality shines through his music, blending future/tech house and heavy hitting drums and baselines.

Today, Dave Winnel returns to Armind for his wondrous solo debut. Adorned with scintillating plucks, groovy bass and continuously evolving arpeggios, ‘Lily Of The Valley’ could very well be the Aussie DJ/producer’s most colorful releases to date.

We caught up with Dave, and spoke to him about this release, his plans for 2019, and working with Armin van Buuren on ‘The Race’.

Dave Winnel – Hey, Thanks so much for taking the time to chat! 2019 has been great so far. Been in Australia enjoying the summer, doing lots of great shows including my summer residency at Ministry Of Sound Aus, and of course working on loads of music.

T.H.E – Your new track – Lily Of The Valley, sounds extremely fresh, and is a bit different compared to what you usually produce. Does this signal something new for you, in terms of music production?

Dave Winnel – I have loads more tracks like this already finished so definitely something new for me but… not an entirely new direction as I’m still making club weapons too. But I love so many so many different genres I need to regurgitate all these ideas inside me!

T.H.E – How long was it in the works, and how was this musical direction inspired?

Dave Winnel – Lily Of The Valley is the successor to one of my tracks I released in 2014, called ‘The Great Valley’. Kinda like PART 2. I started Lily in 2014 also and kinda worked on it on and off until finally, I finished it last year. I was kinda scared to release it tho as it’s so different from my other releases. I’m so glad it’s finally getting out there. Musical direction comes from thinking what would happen If I just let go of all expectations, from labels and fans, and even myself and just created something, with no rules or to fit any genre.

T.H.E – This is going to be released on Armind. Your last release on the label was the massive collaboration with Armin van Buuren – The Race. How was it working with him, and how much of pressure did the track bring on you, given its success?

Dave Winnel – Working with Armin was crazy for me, I still can’t believe we did that. The first time we met up properly was when he was in Sydney he literally had 1 hour spare before he had to go to the airport and he said let’s meet up quickly. I was nervous as hell but he bought me a beer (Heineken being the Dutchman he is) and instantly it was as if it was like 2 mates chatting about music! I showed him one idea, he loved it so I sent him the project file, he added his classic Armin bits, including the memorable melody in the breakdown, then the track was pretty much finished. There was lots of pressure afterwards but there’s always pressure on us artists I think, to do better with each release. ‘You’re only as good as your last release’.

T.H.E – We hear that there are big things in place that are coming up! Could you give us a hint of your 2019 plans?

Dave Winnel – Something which I’m very proud of is I’m releasing a 4 track EP which is getting a Vinyl release. Which is about to go on sale. Super excited to see it go out into the world. I’ll be heading back over to Amsterdam for the summer for gigs around Europe, stay tuned for those dates!! 😀

T.H.E – Lastly, what are your thoughts on the Australian dance music scene, on how it’s evolved?

Dave Winnel – Australia is having some serious problems at the moment. First, the club scene was decimated by ridiculously strict licensing rules. The club scene is basically a ghost town by 3 am and some areas have entirely closed down due to these laws. And now the festival organisers are getting hit with even more ridiculous rules which have seen 2 major festivals actually cancelled a week out before they were meant to go ahead. It’s absolutely devastating. But having said that, the ‘Dance Community’ are resilient and are fighting hard to not let the music die.

9 Things To Talk About: Moodshift 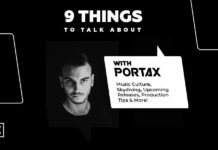 9 Things To Talk About: Portax

9 Things To Talk About: TOR