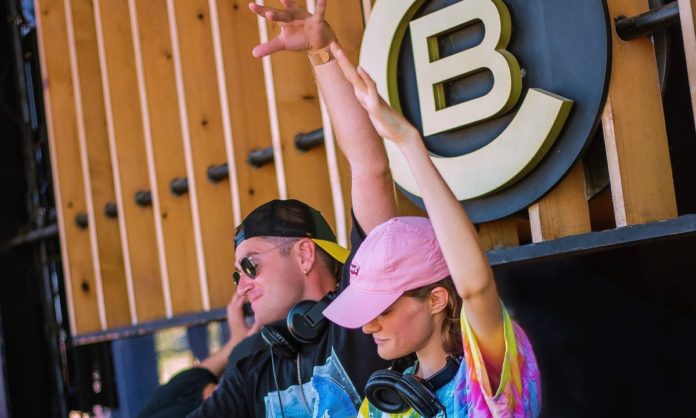 EchoStorms are Ben Locke and Katya Fadeeva. Born out of their mutual love for electronic music and informed by their disparate but complimentary musical backgrounds, Echostorms make full-blooded, emotionally-charged dance music that
incorporates elements of melodic techno, indie dance and house, resulting in a highly distinctive and electrifying production aesthetic.

We caught up with the duo, to learn more about how it started off for them, “Tidal Wave”, favourite plugins and more.

EchoStorms – Hey! Thanks for having us, it’s great to be here!

2021 has been pretty much everything to be honest! There have been amazing moments – the shows, Tidal Wave being in the top 20 Most Heard Tracks on 1001 Tracklists, charting in multiple territories and being played by David Guetta and so many other legendary DJs have to be some of the highlights! At times it’s been very frustrating and a little bit start stop due to things beyond our control and there has been a lot of hard work, but it’s all been worth it.

Aditiya – Could you tell us more about the duo ‘EchoStorms’?

EchoStorms – We met through a mutual friend online in 2019 and decided to meet each other half way (Ben was in the UK and Katya in Russia) in Munich, Germany. As soon as we saw each other at the airport it was like being reunited with a long lost best friend and the chemistry was instant. We ended up travelling to Paris together in a van and it was during that journey that EchoStorms was born. After that we went to St Petersburg and lived there for a month working on new material and absorbing the local culture before flying to the UK, continuing developing our sound and building our repertoire.

We’re always incorporating new elements and musical ideas and our sound is constantly evolving. We don’t like to stay still for too long musically, we always like to switch it up to keep it interesting.

Aditiya – Your newest release Tidal Wave sounds marvellous! Could you run us through your creative process?

EchoStorms – Thank you, really happy you like it! The story of Tidal Wave is quite interesting:

Ben: I wrote the first incarnation of Tidal Wave back in 2014 when I was working with Timbaland and he wanted songs to pitch for Birdy’s forthcoming album. It was written the old-fashioned way – on an acoustic piano.

Katya: Last year we were going through everything Ben had written that hadn’t been released and cherry picking the best toplines to turn into EchoStorms Cinematic Tech House Anthems. After going through about 20 hard drives of material I came across the original acoustic demo of Tidal Wave and fell in love with it immediately.

We finished off the writing together and recorded our vocals to a simple acoustic piano and a click and then produced the final version around our vocals in our mobile studio, set up in various hotel rooms all over Europe.

Aditiya – What is the DAW you use? and what are your favourite plugins?

EchoStorms – We use Logic and we love it. Many Ableton users have tried to tempt us over to the “dark side” but we’re staying firmly put because Logic’s workflow is just so natural for us that changing DAW would be essentially fixing something which isn’t broken.

We love the UAD plugins – we always track vocals with the Unison Neve 1073 and Tube Tech CL1B. The LA-2A, 1176 and Massive Passive and basically everything else UAD do is absolutely amazing so those are always heavily used by us. FabFilter Pro Q2, everything from Soundtoys (EchoBoy, Little Alter Boy etc), Kickstart, all the iZotope stuff and Effectrix are also favourites and crucial tools for us in the studio.

One plugin we started using recently on vocals is Fresh Air from Slate Digital – works really nicely to add a nice shimmery top end to vocals without sounding harsh.

Aditiya – How do you both deal with conflict of interests while workings?

EchoStorms – Shouting, screaming, hysterical scenes, alcohol (although not yet drugs but I’m sure that’s somewhere soon in the pipeline)! Then we realise that we are both so insufferable that no one else would have us and we don’t want to be alone so we kiss and make up and it’s back to business as usual.

Aditiya – The Chapter & Verse remix sounds stunning! Could you tell us more about the tech-house rendition and why you wanted it on the package?

EchoStorms – Our core sound leans much more towards tech-house than the original version of Tidal Wave so to have a version that’s bang in line with what we play in our sets and our future releases coming out later this year was essential for us. We love Chapter & Verse’s work so much that getting him involved with this release was really important for us. We have a collaboration with him coming out on Atlantic in October so for our audience that’s going to be an interesting continuation of our musical journey with him that started with the Tidal Wave remix.

Aditiya – Katya, could you tell us about your past experiences in Russia and how it influences your music?

EchoStorms – I’ve had lots of very interesting experiences during my formative years in Russia but not many I would want to commit to print ha ha!

Aditiya – Ben, how does it feel to growing up in the UK, the epicenter of dance music? What were some of your formative experiences?

EchoStorms – I got into dance music at a really young age and I was desperate to be able to get into the clubs but as I was only 16 at the time none of the bouncers would let me in. Luckily for me I was working as an assistant in my first job at the local studio where all the DJs came, so I made friends with them while they were there and then went with them to their shows. No one even asked my age – I was with the DJ!

My first taste of success in the dance music industry was when I did a track with Jason Nevins which did very well in the UK club and dance charts and was included on one of the Floorfillers compilations which went platinum – so that was a great start!

Aditiya – Lastly, what’s on the shelf for the last quarter of 2021?

EchoStorms – We’ve got three singles coming out in October/November – kicking off on October 22nd with “Delirious”, a collaboration with R3WIRE on James Hype’s Stereohype label. R3WIRE is such a genuinely great guy and a really talented DJ and producer so it’s a real pleasure to be releasing a collaboration with him, especially on Stereohype – who in such a short space of time have built themselves into a real force to be reckoned with!

Next up, on October 29th we’re releasing “U Wish”, a collaboration with the legend that is Chapter & Verse on Atlantic Records’ new Tech House imprint Signal Supply. We loved working with Chapter on Tidal Wave but this track is something different – it’s absolutely crackers!

One week later on November 5th we’re releasing “Do It for Me” on Black Hole’s Tech House imprint Force Of Habit. It’s a quirky and cinematic Tech House track that’s had great reactions at our shows, so super excited to be releasing this heater – especially on bonfire night in the UK!

We’re also about to announce some more shows so stay tuned!