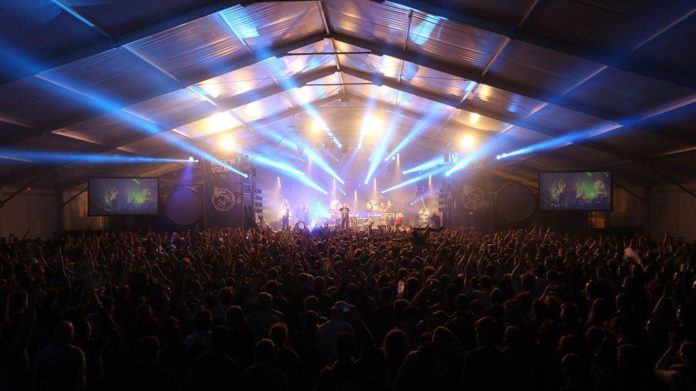 For ten years now, Hilight Tribe has been sharing their acoustic trance music and their lifestyle that is simultaneously close to Earth and conscious of modern technology.

With their 7 albums, 1 DVD, 5 video clips and 600 concerts, Hilight Tribe are true innovators with their electro-instrumental sound which fuses Guitar, Bass, Drum set, Voice,Congas, Djembe, Didgeridoo as well as other string and percussion instruments from all over the world.

We have the opportunity to catch the ‘Tribe’ live at the 10th anniversary of Sula Fest, scheduled to take place in less than a week and managed to catch up for a chat about their recent collaboration with Armin van Buuren and Vini Vici, their journey with India and plenty more!

Shantanu – Tell us a little about the Hilight Tribe journey so far.

Hilight Tribe (Ludo Ji) – This journey that Hilight Tribe has been on has led us to travel to amazing places and atmospheres where we could create and express this organic trance music. On that path, we connected with inspiring people all over the globe who remind us how worth while this whole experience is!

Shantanu – What was the inspiration behind starting such a project?

Hilight Tribe (Ludo Ji) – Since the beginning of the Tribe, we’ve always loved to combine ethnic or traditional instruments with experimental effects. At the peak of the outdoor trance party phenomenon of the 90’s, our producer Jmarc Landau (rip) gave us all the necessary conditions to create a new genre of 100% live instrumental trance and play it in front of what were soon be our core followers. We kept on playing guitar, bass, drums, percussions and vocals but with a wide ethnic or classical palette of instruments linked to effects or triggers. Our rhythms, tunes and trance oriented rifts soon defined the “Natural Trance” genre that the band is still faithful to 8 albums later.

Shantanu – How has travelling all over the world and observing the various cultures influenced the music you guys have made?

Hilight Tribe (Ludo Ji) – It’s that encounter and influence of those various cultures which gradually molded our sound and who we are. Music from around the globe has given us a vast lexicon of rhythms, tunes and songs. India and Tibet have definitely played a higher ranked role in the transformation of our perception, habits and life style. Naturally each member has a specific connection with a given country or culture. Greg is mega connected with Japan, Roots with Africa.. Naturally we all fell in love with India and no distance or time can separate us from its enchantment:)! Of course we’re always stoked to discover new cultures and instruments…

Shantanu – What do you guys generally do in the months when you’re not on tour performing?

Hilight Tribe (Ludo Ji) – Well right now, between new year’s and early march, we’re all enjoying our holidays. Some travel far from the European winter, others stay with their family especially since most of us are fathers. It’s also a fantastic moment to reconnect and get some inspiration for the upcoming season. Meanwhile, a new tour is being planned with full on dates all over the globe.

Shantanu – Could you tell us a little about your journey with India?

Hilight Tribe (Ludo Ji) – Before coming to India, India came to us. Especially in Ibiza, where we recorded our first albums, we got fresh energy from people back in Goa or other regions where they had lived intense adventures. We already felt transported into India’s magic as they would narrate what seemed like the tales of Sheherazad. In the late 90’s/early 2000’s, a few members of the band equipped with some instruments came to Goa and later to Rajasthan, Himachal, Varanasi and countless other magical places where we learned so much and made human ties that are still so strong today.

But it was on the occasion of the memorable “Live in India Tour”, where among other venues we played for Jehan Johar at the Blue Frog, that we really connected on a massive level with the Indian audience. The crowd was so exhilarated by our set and especially “Shankara” and “Free Tibet” that we were called to come back many other times and renew the extraordinary feeling of both, being in a country that we love and being paid to blast the music that makes us alive!!

But it is essential to underline that none of the Hilight Tribe India tours or epic adventures would have been possible without our agent Wafisha Rahman’s work and her outstanding management via her W.A.F. artist booking agency. Needless to say that the tribe on the road and on stage with it’s 200kg of material and live set up requires huge logistics, so we’re very grateful to be working with Wafisha – a resilient woman moving mountains in a world of men.

“Live in India – The Movie”

Shantanu – Are you guys looking forward to playing at Sula fest? What should we expect from your upcoming performance there?

Hilight Tribe (Ludo Ji) – The band and I are always fully excited to travel to India and it’s definitely a privilege to be invited to play at Sula Fest, one of the elite events of the country. Here, we have the opportunity to share our live trance experience with a bigger audience and surf this extraordinary wave all together.

Shantanu – How was the experience working with Armin van Buuren & Vini Vici on Great Spirit?

Hilight Tribe (Ludo Ji) – It was the first time that that 3 different styles united their forces: organic trance (Hilight Tribe), psy trance (Vini Vici) and mainstream trance (Armin van Buuren). We all got together to pass a tribal message uplifted by modern grooves as well as deep-hearted lyrics and tunes. Armin van Buuren and his team were just extraordinarily efficient and professional by bringing this music to a global massive scale.
After our collaboration on “Free Tibet Remix”, the Vini Vici members were once more super sharp during each creative step of this track. We were definitely in constant exchange of ideas with them and this allowed us to be on the same page and materialize a song destined to go viral!

Shantanu – How has the response to ‘Temple of Light’ been?

Hilight Tribe (Ludo Ji) – The much awaited release of our “Temple of Light” album last November was super positive as more and more audience bought the album, allowing new people to discover our sound and spread the word. People are super fired up by “Esperanza” our flamenco track and also strongly support “Gayatri’s” spiritual vibes, “Rainbow serpent’s” tribal style or “Temple of Light” a textbook Hilight tribe psychedelic guitar track. Mixed and arranged by Morad Bensaoud, the “Temple of Light” album showcases more than 20 instruments and countless series of acoustic tweaks and effects that we’re glad to soon present to our Indian audience!

Shantanu – What is the upcoming music you guys have planned?

Hilight Tribe (Ludo Ji) – The band and I are presently browsing the constitutional elements – a secret project about to take birth in the next few months to come, I can’t tell you too much except that it involves deep tribal sounds, unforgettable tunes and …timelessness!!

Shantanu – How would you best describe your sound?

Hilight Tribe (Ludo Ji) – For anyone who wants to discover the Tribe’s sound I would definitely suggest watching our “Live in India” documentary and listen to our “best of Hilight Tribe” followed by”Temple of Light” and wish you a fantastic trip !!

The members of Hilight Tribe are ultra looking forward to see you on the dance floor for a High Vibe-Now Moment Organic Trance Experience!!!!