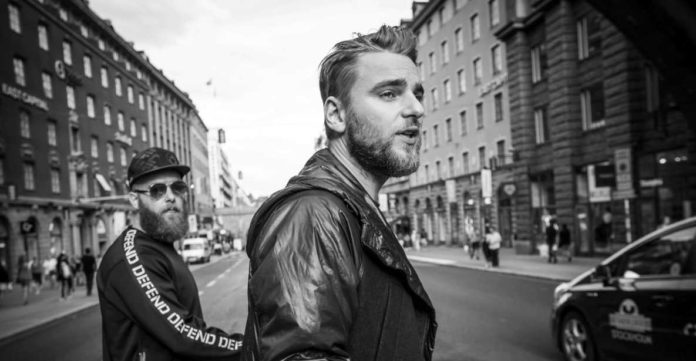 Showtek, one half of this titanic collaboration, consists of Dutch brothers Wouter and Sjoerd Janssen. The duo counts as one of the leading acts when it comes to producing club-smashing dance music and they keep spawning killer tunes time and time again. Since starting their endeavours, Showtek have proven their worth twenty times over with worldwide hit singles ‘Cannonball’, ‘Booyah’ and ‘Bad’, securing a spot in the top 5 of the UK Singles Charts.

After thrilling countless fans the world over since the beginning of this year, Major Lazer and Showtek finally unleashed their highly-anticipated collaboration: ‘Believer’. The track already caused a myriad of breath-taking moments at festivals such as Parookaville, Lollapalooza, Burning Man and Rock Am Ring, now seeing its official release on Showtek’s SKINK and Diplo’s Mad Decent label.

We managed to catch up with the duo and spoke to them about working with Major Lazer, performing at ADE 2016 and some of their favourite tracks at the moment. Have a read.

T.H.E – How do you look back on your journey, from Walt and Duro to Showtek, with a vast shift in the style of music?

Showtek – You know, we managed to achieve so much with our older style of music. We reached the top of where we could get to and decided to expand our horizons. Now, thinking back, it feels amazing to have come as far as we have and now to be making records with some of the biggest artists in the world. It’s something we’ve worked hard to achieve, but it’s also a humbling thing to be working so closely with artists and producers you respect so much!

T.H.E – What are some of your favourite tracks to play at the moment, and what style of music do you like to listen to in your free time?

Showtek – In our sets we’ve been playing Jewelz & Sparks track Drip a lot as well as some of our own new tracks like Believer, our collab with Major Lazer. In our spare time we always listen to all kinds of music – one of our favourite artists right now is Kanye West.

T.H.E – Did you enjoy performing at ADE once again? You have quite some history with this festival, with your second album premiering there all the way back in 2009.

Showtek – Of course ADE is like home territory for us! We love performing there and we’ve always had such a great reception when we’ve played. This year we have been experimenting with some live elements in our show. So at the AMF Arena show we had a violinist performing alongside us and we also had a singer who did Believer with us. We’re really excited about bringing more and more live elements into the shows and looking forward to being able to create some really special and unique moments with the crowd this way.

T.H.E – Did you manage to catch up with some old friends at ADE too?!

Showtek – Ha! Yes! It’s a great time of year because everyone is in the same place at the same time. You know, all of us DJs and producers travel around all the time and we bump into our friends often. But when you are all in the same place it’s a great excuse to have a party with everyone. And, of course there’s lots of business to do too!

T.H.E – Could you tell us a little about the new track with Major Lazer?

Showtek – So a couple of years ago we hooked up with Diplo at his studio in LA. We’ve been fans of each other’s’ music for a long time and we’re really happy with how the record came out! The vocal came from a collective in Trinidad called Freetown which Major Lazer found and we then worked on it to turn it into a big festival record.

T.H.E – How was the experience of collaborating with Major Lazer, who like you, also like to discover various different kind of sounds, and of course have given some of the biggest hits of the past two years?

Showtek – It was amazing to work with Diplo. We’re such big fans of his music and his work ethic is incredible. We really had an opportunity to be creative with this record, because Diplo and Major Lazer are known for so many different styles and sounds. It meant we could be totally free to bring in some classic Showtek sounds but also create a whole new vibe. We’re so happy with how it came out.

T.H.E – What are some of the favourite cities/clubs you like to play at? Any plans to be back in India sometime soon?

Showtek – To be honest, every city and/or club that we’re playing so amazing that we can’t pick a favorite. We hope to be back in India very soon! Keep an eye on out tour schedule to see when were back.

T.H.E – What are some of the exciting projects you have coming up in 2017?

Showtek – Haha, that would be telling! We have lots lined up, including some brand new songs that we think might surprise people. But for now we are concentrating on Believer and pushing that record as far as it can go.

T.H.E – Best advice you have received from another DJ that you’d like to pass on to aspiring DJs reading this?

Showtek – Always believe in yourself. It’s the best advice really. The music industry can be hard, but if you keep believing and keep working then you can achieve incredible things.