Hailing from The Netherlands and residing in the UK, Jantine has worked with a long list of A-list musicians including Skrillex, Ryan Lewis, Alison Wonderland, Hardwell, Monsta X, SHINee, NCT127 and many more.

We caught up with her, to talk about how 2021 has been for her, her zodiac sign, her writing process and more.

Aditya – Hey Jantine, thanks for taking time out for this interview! How has 2021 been for you?

Jantine – Thanks for having me 💜

2021 has been weird and awesome. Personally I’m in a better place than I’ve ever been. I also feel like I’m really starting to settle down in The UK. I also was finally able to see my family in The Netherlands again. So good things.

2021 also marks the year of my comeback as an artist. It was never my plan, I was super happy working as a songwriter for other artists and being a ft artist. But at one point I couldn’t resist any longer: I HAD to release these songs I loved that were lying around on the shelf. Although I got great feedback from artists/labels, I guess the songs were always too “me” to pitch them out… I actually think I subconsciously have been writing for my artist project for quite some time haha. When my dear friends Emy Perez and Amerildo de Krijger asked me to release my work through their own label, I could only say YES. I don’t believe this was a coincidence <3 Aditya – It’s rare that we get an opportunity to interview singer-songwriters, we’re very excited about this! Could you share your writing process?

Jantine – When I’m in the room with people, we all start chatting concepts, maybe the producer gets a vibe going… until something clicks. Sometimes we chat for ages, but I cherish those moments as they are all part of the process and getting to know the beautiful people you are working with is a privilege. Off that concept I normally try to come up with a chorus and try to tie in the melodies and lyrics fully. Once you have that, most of the work is done really.

When I work alone I just hold these conversations in my head haha. And I like to sit behind my piano or lay on the sofa. Ideas come and go at any time (day or night). My phone is full of concept ideas and voice memos.

I just love writing so so much.

Aditya – You could tell us about your newest release ‘Stockholm Syndrome’

Jantine – This is my second release with BB Music Group and I’m sooo excited!

Where else could this track have been written but in Stockholm, with the awesome Matilda Thompson and Oliver Forsmack. It’s about this boy I fancied for a bit. I KNEW we would be an absolutely catastrophic duo but I couldn’t stop thinking about him, and even though I kept pushing him away, there was this deep interesting side to him that kinda held me hostage and that I found so attractive.

Since Stockholm syndrome is a condition where hostages develop emotional feelings for their captors this was the perfect metaphor. Oh and also, it’s a Blink-182 song :)

Aditya – Would you like to tell us the production process of the song? I’m keen to know how the vocals & lyrics go hand-in-hand with the music!

Jantine – It all happened in the room, on that day with Matilda and Oliver. Oliver started playing the chorus stabs and Matilda and I were both like HELL YEAH. It inspired us and the song was done in no time. I’ve always wanted to write a song called Stockholm Syndrome and I’m just so glad it happened that day with those two people.

Aditya – Who are your influences?

Jantine – So many. The Verve is my favourite band of all time. I listen to Blink-182 all the time. I love Nirvana, Abba, Chopin, Rüfüs du Sol, Justin Bieber, Phoebe Bridgers, Beck, The 1975, Machine Gun Kelly, Avril Lavigne and Fleetwood Mac. And the list goes on.

Aditya – How do you feel about achieving #1 in Billboard Charts? it’s certainly the hottest listing out there.

Jantine – That was so surreal. I guess it also really happens when you least expect it to. It was an absolute pleasure being part of NCT127’s number one. I still need to order the plaque though lol.
I have to admit, that it’s wired in my brain to achieve something and think “on to the next” immediately. Achievements make me even more ambitious.

Aditya – From Netherlands to the UK, how did that happen?

Jantine – I got stuck there basically 😂

The amazing Floris Hullemans introduced me to Ed Graves (who now is my most frequent collaborator and writing partner) late 2019. Ed and I decided to work together loads and on one of my trips to Bath the first lockdown hit… I actually got stuck. I lived in Ed’s family home for three months, and I am forever thankful for their hospitality and kindness. Lockdown was amazing. Ed and I were writing all day every day in his home studio (the most amazing studio imaginable) with the occasional gaming sesh, brownie and badminton game. Good times for sure <3. I then decided to move to Bath in the middle of the pandemic and I haven’t regretted it in the slightest. We have such an amazing thing going on!!! Aditya – I see that you have a huge repertoire of artists you’ve worked with, who was the most fun to work with?

Jantine – I know it’s a boring answer but for the life of me I couldn’t pick one. 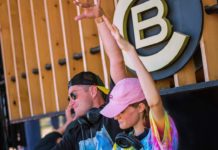