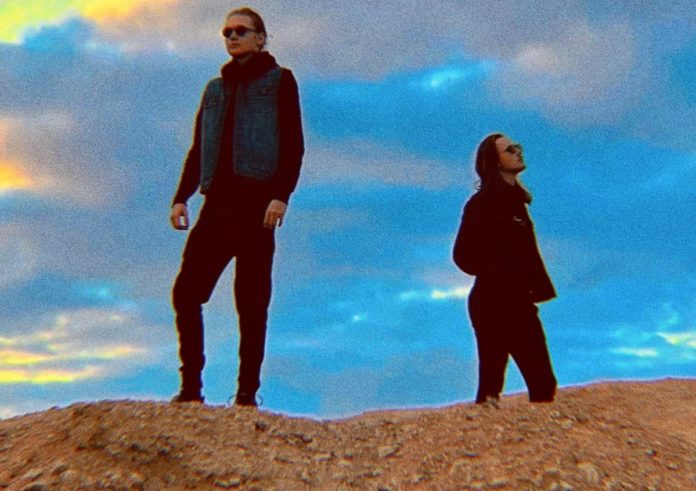 Over 25 million streams to the good since emerging onto the scene with their critically acclaimed debut EP Midnight Astronaut back in 2014, brothers Jordi and Taylor now pull out all the stops with this latest retro cut ‘Sometimes’ combining classic 80s influences and evocative, melancholic vocal lines with their unmistakably hazy retrospective soundscapes.

Released on Friday via Manta Recordings, we caught up with the in form duo to discuss the new record, early influences, life during the pandemic and their favourite bits of studio kit.

T.H.E – Welcome Maximum Love, we are very glad to be talking to you on T.H.E Interviews. What’s been happening over the past few months in your world?

Maximum Love – Hey! Thank you for having us. Over the last few months we’ve been having a good time writing new songs, honing our skills and casually playing video games. A few months ago, a couple of our songs were actually put into a really cool cyberpunk video game called “The Ascent”, so it was super awesome to be able to play that together and hear our music blaring back at us haha. Other than that, we’ve just been really excited to hear what our fans think about our new song.

T.H.E – Please can you introduce yourself to our audience?

Maximum Love – We are Maximum Love, just two brothers from the UK who love writing and producing music… It kind of is as simple as that!

T.H.E – When did you guys first start making music together?

Maximum Love – We first started making music together as kids basically, making beats on the PS1 game “Music 2000″… It’s been a really long journey. Neither of us were properly trained to be musicians or producers, and we have no family background in music either. One day we just had this crazy idea to become underpaid musicians and it totally worked! But jokes aside, we are happy to be able to do what we enjoy. Maximum Love as a band was probably first actualised in around 2011, but we were so young (the youngest of us being just 13 at the time), we didn’t get round to releasing anything professionally until 2014.

T.H.E – Did the pandemic situation and staying indoors give you more time to explore your productions and make new music?

Maximum Love – Yeah absolutely, it gave us a chance to experiment with new sounds, new instruments and production techniques that we wouldn’t usually go for. However, it was also a difficult period of time for everyone, it was unprecedented, which was quite disruptive in its own way.

T.H.E – We heard your amazing new single ‘Sometimes’ and we love it. What went into making this record?

Maximum Love – Thank you! This record was the first track we wrote off the back of our last album, “Jupiter”, which came out in early 2020. “Sometimes” is a song that we think holds a lot of energy, we tried to capture something dreamy and which simultaneously carried a punchy weight to it in the chorus. A combination of hearkening back to our older music stylistically and striving for somewhat catchy pop elements.

T.H.E – Can you share the influences behind your production style?

Maximum Love – We are inspired by lots of different styles of music, and enjoy pretty much any genre of music as long as it sounds good. Things like French House, Electro, Rock, Disco… are all major contributors to the sound of Maximum Love.

T.H.E – What hardware/software do you use to produce the single?

Maximum Love – The main hardware we used for this record was the Roland Juno 106 synthesiser, and we use it on pretty much all of our songs… It just has such a brilliant classic analogue sound that seems timeless. It’s also great to experiment with the signal of it through various pedals/effects. As for software, we mostly use FL Studio. It happened to be the first major DAW we stumbled upon when we started and we’ve been using it ever since. If it ain’t broke don’t fix it!

T.H.E – We’re loving the remix from Grammy-nominated producer Latroit. How did this come about?

Maximum Love – Yeah! We are really pleased to be able to have Latroit on this release with us, his remix offers a super up-beat, fun and unique twist to the track. It came about from Manta Recordings label boss Sian pulling some strings, and we’re really happy he did. Dennis’ accomplishments in the electronic music scene need no introduction, he’s worked with the best of the best. We are honoured to have him remixing our work.

T.H.E – What are your hopes and dreams for the next few years? Any specific goals you’d like to achieve?

Maximum Love – Over the next few years we’d just like to build more on what we have, the goal is to just keep going and going until we drop basically. In 2022, we plan to release our third album, some of the songs are closer than others on being completed.

T.H.E – Finally, what can we expect from you guys in the rest of this year?

Maximum Love – For the rest of the year, we hope to get out at least a few more singles. Our fans have been waiting patiently for quite a while now!