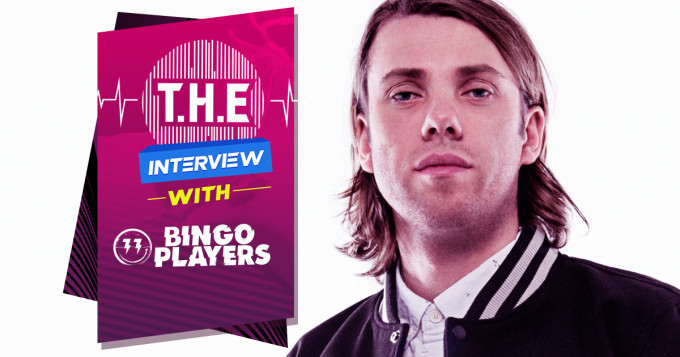 Maarten Hoogstraten from Bingo Players wasn’t like other kids his age. When he was 10, his friends were buying toys to play with, but Maarten was already spending his cash on vinyl and CDs.

When he was a teenager, two events would change his life. An early music software program called ProTracker was released, and he would meet Paul Baümer, who would become his musical partner for the better part of the next 15 years.

In October, Paul took a turn for the worse and he passed away in December 2013. There was an outpouring of support from the EDM community with peers like Hardwell, Steve Aoki, Kaskade, Skrillex and Armin Van Buuren paying tribute on social media, at shows and in the press.

Maarten was stunned and didn’t know what to do. But Paul’s last wishes were for his best friend and his musical partner to keep making music.

“He always said to me, ‘If you can find solace and continue what we started, please do so. Please continue the music. Carry on the Bingo Players flag,’” said Maarten.

He wasn’t sure if he could carry on. But, he said, “I took a holiday, took some time off to clear my head and think about things. I thought, “Yeah Paul’s right. I should continue, and continue the name and continue his legacy.”

We got a chance to get up close and personal with Maarten and speak to him about carrying the Bingo Players’ flag along with his thoughts on the current dance music scene. Read on to know what he had to say. :)

T.H.E – Hey Maarten, firstly thanks a ton for this interview! How’s it going?

Bingo Players – Hey there, no problem! All is well with me thanks. Summer is always a busy time with lots of tour dates in different places around the world, but it’s a lot of fun!

T.H.E – It’s been more than a year since Paul Baumer’s passing and we sorely miss his talent. We love and respect the spirit you have shown in continuing the legacy. How difficult has it been?

Bingo Players – It was of course extremely difficult to continue Bingo Players, but Paul made me promise that I would continue to do what we both started. He was my best friend, and we worked together for so many years so I feel like I know what he would say when I am making music, and I feel like he is with me in spirit.

T.H.E – What are some of your favourite production tools to use to create your music?

Bingo Players – I’m using Ableton as my DAW and use plugins like Massive, Nexus2, Spire and Serum. Besides that I love to mess around with my analog synths like the Roland Juno2, Virus TI and Korg M3.

T.H.E – What are currently your main challenges as a DJ? What is it about DJing, compared to, say, producing music that makes it interesting for you?

Bingo Players – I think the most challenging thing is the lifestyle and being away from family and friends for long periods of time. It does get very tiring, but when you’re standing behind the booth looking out at a massive crowd of people all enjoying themselves… you know exactly why you’re doing it!

T.H.E – What makes you decide to play a particular record during one of your sets?

Bingo Players – I decide to play songs that I know will make people sing and dance. I just want the crowd to have a good time and give as much energy as the tracks are. I also like to play classic BP tracks to really make sure it sounds like an authentic Bingo Players set!

T.H.E – When all the partying is over how do you like to chill out?

Bingo Players – Play some video games :D. I am a big fan of retro video games!

T.H.E – Referring to the current EDM scene, founder of HARD, Gary Richards had this to say about EDM, “I consider myself a music person in the music business, and I just felt with this whole EDM thing, it’s getting beyond ridiculous. People who have half a song think they’re f*cking Led Zeppelin… To me, EDM is pop sh*t. For me, electronic music is Aphex Twin, Kraftwerk. It’s important for people to know that there is quality electronic music that is not part of that hype bullsh*t other people are a part of.” What are your thoughts? How do you see the scene in 5 years?

Bingo Players – I personally love the scene at the moment, as there is so much diversity and so many different sub-genres evolving and becoming more popular. I think the scene will have changed a lot in 5 years, but not necessarily in a bad way. People are becoming more and more aware of electronic dance music, and experiementing with new sounds and styles so it should be a really interesting few years for the scene.

T.H.E – What would be your advice to up and coming producers/DJs?

Bingo Players – Do your own thing and don’t be afraid to stand out from the crowd. There are so many producers and DJs these days – you have got to dare to be different!

T.H.E – If you had a time machine what year would you go back to and why?

Bingo Players – Would love to go back to when me and Paul first started Bingo Players. Was such an awesome time and we really were living our dream. Although I don’t know if it’d be possible to play 5 shows in one day like we did a few times back then…

T.H.E – Your 5 favourite tunes of the moment.

T.H.E – Thanks Maarten. Wish you the best in all your future endeavours. :)