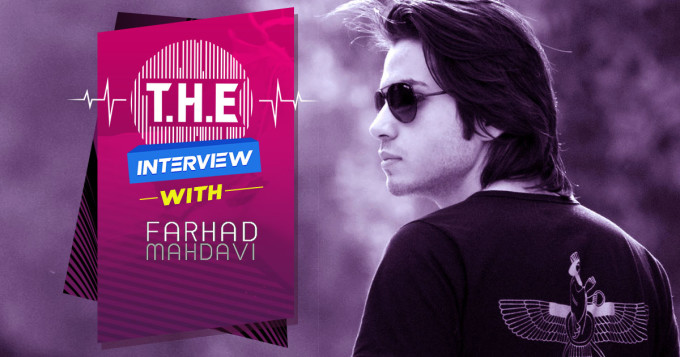 What is trance without emotion? According to Farhad Mahdavi, they are one and the same.

Hailing from Iran, Mahdavi’s production efforts revolve around giving his listeners the opportunity to feel alive. He believes that music comes from nature, and like the roar of a mighty jungle cat, it should resonate deep within one’s soul.

And this is something which is clearly showcased on his brand new album, “Tehran Echoes” which is out on Abora Recordings. Considering Farhad is someone who has had a massive impact in 2015 and is clearly destined for the top, we just had to get hold of him and discuss “Tehran Echoes”. Read our chat below where Farhad speaks about various album related topics like the album title, his source of inspirations and much more. :)

T.H.E – Hi Farhad! Firstly, thanks for this interview. What are you upto currently?

Farhad Mahdavi – Hi there! You’re very welcome and thanks so much for interviewing me. Everything is fine; I’m resting now after working years on my first artist album “Tehran Echoes”. I want to make a break, and then go for future singles as my mind is full of ideas!

T.H.E – Congratulations on the release of your album, “Tehran Echoes”. How have your fans reacted to it?

Farhad Mahdavi – Thank you very much! Actually they have been waiting for a long time because I announced it in 2013 and I’m very glad to see that they like the previews that Abora published. When Armin announced my artist album on his radioshow “A State Of Trance”, many people mailed or messaged me about it.

T.H.E – How did you decide that the time is right to release your first album?

Farhad Mahdavi – In 2013 I realized that I had enough ideas and also enough confidence for releasing an album! So I decided to start it. It was a lot of fun but also very hard! Managing it was very very hard. I would like to thank the Abora Recordings team who helped me manage the productions and other stuffs. They helped me a lot.


T.H.E – Considering that it’s your first artist album, we are sure that you would have been nervous leading right upto the release date. Can you describe it for us?

Farhad Mahdavi – Hmmm actually no! As Abora managers and staff are really skilled at handling and managing work, everything went well and we’re releasing it on time.

T.H.E – Why the name, “Tehran Echoes”? What is the message that you wish for your fans to take away from the album?

Farhad Mahdavi – Tehran is the capital city of my country; I love walking in Tehran streets. When I see people – poor and rich –, and buildings… When I see the skyline from mountains around the city… All these feelings gave me inspiration to produce those tunes. In the first track of my album I chose Tehran atmosphere sound effects combined with Persian instruments that “Mastan Ensemble” played for me.

T.H.E – How long has this album been in the works?

Farhad Mahdavi – About 20 months. I remember some sleepless nights, working on the tracks till the morning. Very much fun combined with hardworking!

T.H.E – Did you have any particular sound in mind, before working on this album? If yes, did it evolve while you created the album?

Farhad Mahdavi – I think no, I had my own inspiration.

T.H.E – Any inspirations that you looked upto while producing this album as creating an album is quite a mammoth task? Who inspired you the most?

Farhad Mahdavi – I had inspirations from nature and streets of cities! Also watching movies, and I listen to orchestral pieces a couple of hours per day! Those live instruments inspire me a lot.


T.H.E – Tough question, if you had to pick your 5 favourite tracks from the album, which ones would it be?

Farhad Mahdavi – I can’t tell; like a father can’t tell about his best child! All of my tracks are my children and I love them all, Hehe! They are alive for me…

T.H.E – Could we see you promoting the album via an album tour?

Farhad Mahdavi – Unfortunately not now because I still don’t have any management or agency to organize live gigs. Also the album is not clubby enough, and all tracks carry a sense of serenity.

T.H.E – Lastly, are there any shoutouts you would like to add?

Farhad Mahdavi – I want to say thanks to T.H.E – Music Essentials for your useful articles and posts, and thank you so much for starting this interview. Also I would like to thank the whole Abora Recordings team who helped me a lot in performing this hard step in my career.


T.H.E – Thanks a ton Farhad. Wish you the very best in all your future endeavours.

You can listen to the album below.