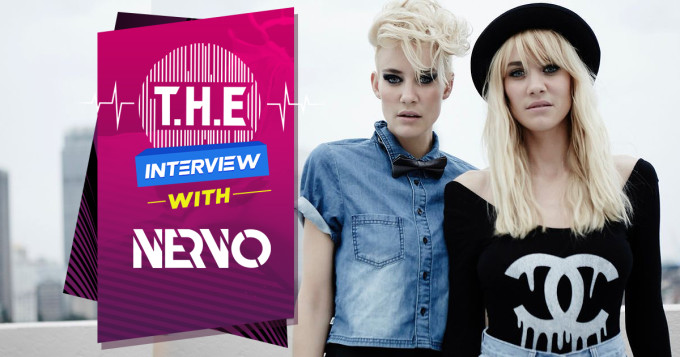 From songwriters to artists and super-fans to superstars, electronic dance music’s first sisters – Mim and Liv NERVO of NERVO – have catapulted onto the international stage, straight from the pit in front of it. These multi-talented DJ dynamos are the all-time top-ranking female DJs in the world, voted by their millions of fans to No. 21 on DJ Magazine’s influential 2014 ‘Top 100 DJs’ poll. With their brand new album, “Collateral”, just around the corner, we did what we do best, catch up for a chat around the album and the message that the NERVO sisters plan to share with their fans via the album. While we were at it, we also discussed their collaborations with Nicky Romero, Kreayshawn plus Nile Rodgers and plenty more. Read on to know what they had to say! :)

T.H.E – Hi Mim and Liv, thank you for taking the time out for this interview. Also congratulations on being our “Artist of the Month” for July 2015.

NERVO – Wow, thank you for having us and we didn’t realise that we were Artist of the Month. It’s an honour.

T.H.E – The new album, “Collateral” will be out soon. How has the feeling been, leading up to the release date?

NERVO – We’ve had mixed emotions – we’re nervous, obviously. But also excited and relieved. It’s our first album and to be fair now we’re really looking forward to seeing how people are going to react to it. We’ve been working on this album for quite some time. There were some ideas that we initially came up with a few years ago, so we had to revamp some of those ideas. We’re just excited to see what people think.

T.H.E – How did the title come about? What is the message that you want to share with your fans via “Collateral”?

NERVO – Collateral for us means everything we’ve been through to date has brought us here. It’s all collateral. There were several dark years where we were at a bit of a cross road, we thought we were going to give up the music business altogether. We have a mentor in the business who would always tell us to have patience. At the time we weren’t really sure what he meant, but now looking back, we feel that all the relationships we built back then were key; whether when we were writing for others, or people we met that then went on to become artists and wanted us to work with them. Not forgetting the skills we were building in the studio and the hustle and grind we endured. It’s all been collateral and has brought us to where we are today.

T.H.E – There are some very impressive collaborations lined up with Nicky Romero, Kreayshawn and Nile Rodgers. How did you manage to finalize the list of collaborators you want to feature on the album? What is the thinking that goes into this?

NERVO – We’ve worked with so many people throughout our career and it was actually really tough to select who should be on the album. We had so many ideas, so many tracks. We must’ve narrowed the final 15 tracks down from a list of 45 records or ideas that we started.

The features definitely had an influence on which records made the album. Obviously we are buddies with Nicky Romero. We had a record with him a couple of years ago, “Like Home” so we definitely wanted him on our album. Kreayshawn we hit up on Facebook actually. Nile Rodgers, we met through Nicky. We were both working on Niles’ album and we became friends. One thing led to another and we asked him if he wanted to feature on a record that we had done called “The Other Boys.” By that stage, we already had Kylie and Jake Shears on it, so he jumped on and he was the perfect icing on the cake. You meet people in a variety of different ways, for instance Jake, we met at a festival – he was playing with the Scissor Sisters; we became friends and eventually we got into a studio together.

T.H.E – We also heard about the fact that “Collateral” was created in a variety of locations. Could you shed some light on this? Which locations proved to be the most inspirational and exciting in terms of songwriting?

NERVO – Collateral was made on the road, in our home in London, in the studio in LA, and bits and pieces from around the globe. I think that’s how a lot of records are made these days. As far as inspiration goes, we gather inspiration from everywhere and nothing helps more from a good night’s sleep the night before. We find that we are most productive when we take a few consecutive days off. Three or four days in a row in the studio is brilliant for us. That normally happens in London or LA.

T.H.E – Your first single from the album, “Rise Early Morning” was released quite a while back in November 2014. How has the response been to it?

NERVO – We first played “Rise Early Morning” in our Ultra set in March or April of 2014. After the set, there was a lot of buzz amongst our fans asking when it was going to come out. There are other records on the album that we’ve released in the past like “You’re Gonna Love Again”, “We’re All No One”, and “Reason.” They’re all past records we thought were really important to have on the record. We’re really happy with how “Rise Early Morning” was received. We love the video and we still play the track in our sets.

T.H.E – Considering that the first single from the album was released in November 2014, how long has the album been in the works?

T.H.E – It’s quite interesting that you have mentioned “The people we LOVE/like/hate/want/don’t want/need/are/& wanna be!” as your influences in the about section of your FB page. In a nutshell, is that what the NERVO sisters are about?

NERVO – In life, we’ve met people we really like and inspire us and we’ve also met people we didn’t like and in the same way that has probably changed the way we want to be ourselves. It’s all about learning how to be better.

T.H.E – Writing an album can be highly challenging. Are there any shoutouts you would like to add for anyone who may have helped you overcome these challenges?

NERVO – A lot of our friends have told us that we’ve just got to let go and finally be happy with a track. We are perfectionists and can keep working on a track forever. We can still always hear imperfections in our records and keep tweaking.

T.H.E – Thanks a ton for this. Wish you the very best with your new album and all your future endeavors.