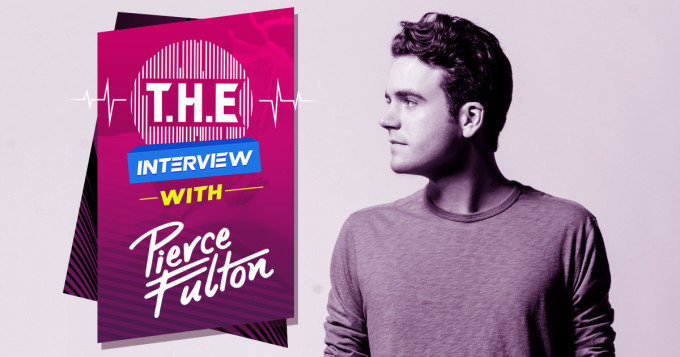 23 years old and based in Brooklyn, Pierce Fulton is subject to the habits of his youth; bouncing between genres and instruments while simultaneously bringing all of these influences into the dance music he’s known for.

He made his first real breakthrough at the age of 18 with his first 3 track EP titled “Pardon My French”. You may have seen the “making of” video where some pretty unconventional sounds were sampled and definitely turned some heads. With breakout singles including Where We Were, Runaway, Old Man & The Sea and most recently Kuaga as well as official remixes for artists ranging from The Killers to Above & Beyond, his style continues to evolve and love of experimentations doesn’t diminish.

With his debut India tour on the horizon brought to you by Submerge, we had a chance to speak to him about how his love for electronic music came about and what is he looking forward to from his fans in India. Read our chat below.

T.H.E – Hey Pierce! Thanks for this interview. What are you upto currently?

Pierce – Hey! Just waiting for a flight to Chicago. Playing a show at The Mid tonight and I’m just hangin/getting ready for the show.

T.H.E – What kind of music and artists did you grow up listening to?

Pierce – Well my parents always had on really good classic rock. I remember the first song I really recited lyrics to was “Franklins Tower” by the Grateful Dead. But I’d usually hear music from the Rolling Stones, The Doors, Led Zeppelin, Bob Dylan and all sorts of really fundamental rock & roll.

T.H.E – You have had around 15 years of experience in classic rock, reggae, blues and a bit of metal. How have these influences helped you in becoming the producer that is Pierce Fulton?

Pierce – Interestingly enough, those influences stayed relatively separate from my electronic music until this past year or so I’d say. I think it was because I needed to really dive into electronic music head first to get a better understanding of it all and later the other sides of my music would shine through.

T.H.E – When was the moment that you knew you had found your unique sound?

Pierce – Well I still don’t think I’ve found it. Whenever I think I’m close to finding it, it evolves. I think it will be an endless chase because if I just had my “thing” and it simply worked I’d get tired of this whole music thing really easily. I need a fire under my ass all the time because it will always push me more.

T.H.E – You have studied electronic music production in Vermont. These days, a lot of aspiring producers prefer not joining such classes calling it a “waste of time and resources”. They prefer learning via YT tutorials etc. What are your views on this?

Pierce – Well the class was when I was in high school and the reason I found it so beneficial was because it covered all of the fundamentals that I would have absolutely skipped over if I learned on my own entirely. We studied the history of electronic music, history and basics of synthesis in general, sampling, a bit of engineering work etc. it was a great introduction into the world for me. And I just took it because it was a music class offered at my high school and wanted to learn more.

T.H.E – Looking at your discography, one thing is pretty clear that your sound has continued to evolve throughout your career. Could we ever see you going back to those experimental and downtempo productions, maybe as part of your album sometime in the future?

Pierce – When I first put out those style songs like 10/6 and my remix of Mutemath etc. I actually started a side project primarily driven by that style. I was gonna start it anonymously and do it for fun but I never had enough time to devote to it. Now that my dance productions are a bit more stable and the times are a little more open to some variety, I may do some releases with that older style. Just gotta square away all my other music first.

T.H.E – Coming to your India tour, this is the first time you will be visiting our country. What have you heard about the dance music scene here? What are your expectations from this tour?

Pierce – I’ve heard amazing things about DJing shows in India! So far the reaction to the shows being announced has been so amazing I really can’t wait to see what it’s like. I’ve never been anywhere even close to India so I have no expectations but it makes me so excited about the trip.

T.H.E – According to you, what is the best part of DJing?

Pierce – When the crowd is consistently happy and I got to play everything I wanted to play. Some of my most recent shows in Baltimore and San Francisco have been great examples of those kinda shows. Everyone has a good time, I got to play some of my new music, some of my old music, and a bit of other goodies that keep the crowd engaged.

T.H.E – What does Pierce Fulton like doing in his free time?

Pierce – I barely have any other hobbies which is sort of crazy…I’ve been reading a lot more lately on flights and during travel. I often find hobbies within music like I just bought this awesome field recorder for sampling and I’ve been just writing lyrics as a brain exercise in my free time because that’s my weakest area in music so I want to improve my skill.

T.H.E – Which are your top 5 essential tunes of the moment?

T.H.E – Thanks a ton Pierce! Looking forward to seeing you during your India tour 🙂

Pierce – Yes see you there!